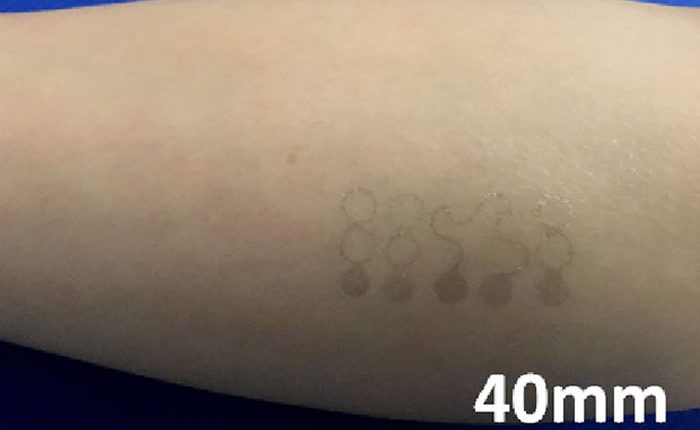 With the same precision as bulky medical equipment, a graphene health sensor that goes on the skin like a temporary tattoo takes measurements. The graphene tattoos, presented in December at the International Electron Devices Meeting in San Francisco, are the thinnest epidermal electronics ever made. They can measure electrical signals from the heart, muscles, and brain, as well as skin temperature and hydration. 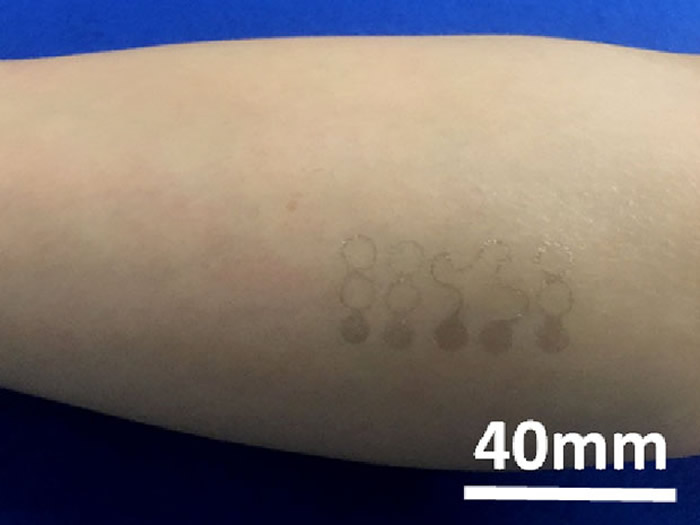 Researchers at the University of Texas at Austin who are developing the sensors hope to develop them for consumer cosmetic use. They also hope the ultrathin sensors will provide a more comfortable replacement for existing medical equipment.

Today, if your doctor wants to monitor your heart rate over an extended period of time to help diagnose some cardiac irregularity, you’ll be sent home with a bulky EKG monitoring harness to wear for 24 hours. The Texas researchers hope to make a system that can take measurements of the same quality or better, but that’s unobtrusive. Deji Akinwande, an electrical engineer who specializes in 2D materials, is collaborating on the project with Nanshu Lu, who works on epidermal electronics.

Materials scientists have for years sung the praises of graphene’s electrical properties and mechanical toughness. What’s been underappreciated, says Akinwande, is that this single-atom-thick stuff is mechanically invisible. When it goes on the skin, it doesn’t just stay flat—it conforms to the microscale ridges and roughness of the epidermis. “You don’t feel it because it’s so compliant,” says Akinwande.

The Texas researchers start by growing single-layer graphene on a sheet of copper. The 2D carbon sheet is then coated with a stretchy support polymer, and the copper is etched off. Next, the polymer-graphene sheet is placed on temporary tattoo paper, the graphene is carved to make electrodes with stretchy spiral-shaped connections between them, and the excess graphene is removed. Now the sensor is ready to be applied by placing it on the skin and wetting the back of the paper.

In their proof-of-concept work, the researchers used the graphene tattoos to take five kinds of measurements, and compared the data with results from conventional sensors. The graphene electrodes can pick up changes in electrical resistance caused by electrical activity in the tissue underneath. When worn on the chest, the graphene sensor detected faint fluctuations that were not visible on an EKG taken by an adjacent, conventional electrode. The sensor readouts for electroencephalography (EEG) and electromyography (EMG, which can be used to register electrical signals from muscles and is being incorporated into next-generation prosthetic arms and legs) were also of good quality. And the sensors could measure skin temperature and hydration, something cosmetics companies are interested in, says Akinwande.

Graphene’s conformity to the skin might be what enables the high-quality measurements. Air gaps between the skin and the relatively large, rigid electrodes used in conventional medical devices degrade these instruments’ signal quality. Newer sensors that stick to the skin and stretch and wrinkle with it have fewer airgaps, but because they’re still a few micrometers thick, and use gold electrodes hundreds of nanometers thick, they can lose contact with the skin when it wrinkles. The graphene in the Texas researchers’ device is 0.3nm thick. Most of the tattoo’s bulk comes from the 463nm-thick polymer support.

The next step is to add an antenna to the design so that signals can be beamed off the device to a phone or computer, says Akinwande.

From power plant to wall socket: calculating the cost