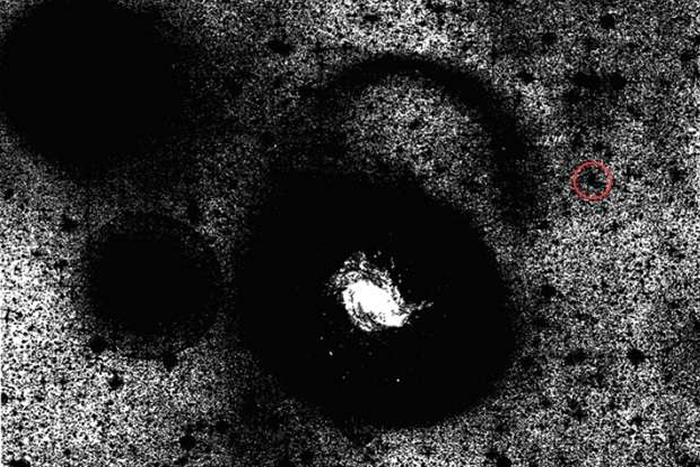 A dwarf satellite of Messier 83 (M83, also known as the Southern Pinwheel Galaxy) located some 85,000 light years from its host, has been found by researchers. This satellite galaxy was designated dw1335-29 and could be an irregular or a transition dwarf.

Messier 83 is one of the closest and brightest barred spiral galaxies. It is located about 15 million light years away in the constellation Hydra. Finding new satellites of galaxies beyond the Local Group such as Messier 83 could provide essential insights on galaxy formation in a cosmological context.

In 2015, the detection of 16 dwarf galaxy candidates near Messier 83 was announced. However, it remained unclear which of them were satellites of this galaxy. To confirm this, follow-up observations were needed to estimate reliable distances.

Now, a team of astronomers led by Andreia Carrillo of the University of Michigan used images from the Galaxy Halos, Outer disks, Substructure, Thick disks and Star clusters (GHOSTS) survey provided by the Hubble Space Telescope (HST) and data from the Very Large Telescope’s (VLT) Visible MultiObject Spectrograph (VIMOS) to confirm that one of the 16 candidates is indeed a satellite of Messier 83.

“Using a combination of VIMOS ground-based data and HST resolved stellar imaging, we have confirmed that the dwarf candidate dw1335-29 is indeed a satellite of M83,” the researchers wrote in the paper.

The team explained that they detected an overdensity of primarily red giant branch-colored stars with a modest overdensity of blue stars at the position of dw1335-29, confirming it to be a nearby dwarf galaxy. Moreover, it permitted them to estimate its distance from Messier 83 and allowed surface brightness profile measurements.

According to the research, dw1335-29 has a half light radius of approximately 2,140 light years and an ellipticity of 0.4. The scientists found that this dwarf is dominated by an old metal-poor stellar population and its metallicity [Fe/H] is -1.3. The team also noted that it is the faintest confirmed member of the Messier 83 group.

Finally, dw1335-29 has been classified as a dwarf irregular or transition dwarf due to its irregular shape and the likely presence of a star-forming region.

“Owing to dw1335-29’s somewhat irregular shape and possible young stars, we classify this galaxy as a dwarf irregular or transition dwarf. This is curious, as with a projected distance of 26kpc from M83, dw1335-29 is expected to lack recent star formation,” the paper reads.

The researchers assume that perhaps dw1335-29 has a larger M83-centric distance and is coincidentally projected close to its host, or perhaps the galaxy lacks a sufficiently dense hot gas envelope to quench star formation in its satellites. They hope that a comprehensive census of Messier 83 satellites and their star formation properties would help to resolve this issue.

“Further study of M83’s dwarf population will reveal if star formation in its satellites is commonplace (suggesting a lack of a hot gas envelope for M83 that would quench star formation) or rare (suggesting that dw1335-29 has a larger M83-centric distance, and is fortuitously projected to small radii),” the team concluded.