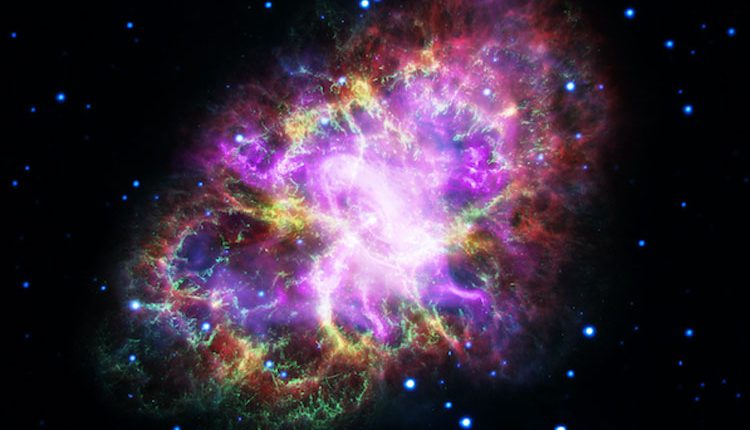 Researchers published ‘slam dunk’ evidence in 2016, based on iron-60 isotopes in ancient seabed, that supernovae buffeted the Earth—one of them about 2.6 million years ago.

University of Kansas researcher Adrian Melott, professor of physics and astronomy, supported those findings in Nature with an associated letter, titled ‘Supernovae in the neighborhood’. Melott has followed up since those findings with an examination of the effects of the supernovae on Earth’s biology. In new research to appear in Astrophysical Journal, the KU researcher and colleagues argue the estimated distance of the supernova thought to have occurred roughly 2.6 million years ago should be cut in half.

“There’s even more evidence of that supernova now,” he said. “The timing estimates are still not exact, but the thing that changed to cause us to write this paper is the distance. We did this computation because other people did work that made a revised distance estimate, which cut the distance in half. But now, our distance estimate is more like 150 light years.”

A supernova exploding at such a range probably wouldn’t touch off mass extinctions on Earth, Melott said.

“People estimated the ‘kill zone’ for a supernova in a paper in 2003, and they came up with about 25 light years from Earth,” he said. “Now we think maybe it’s a bit greater than that. They left some effects out or didn’t have good numbers, so now we think it may be a bit larger distance. We don’t know precisely, and of course it wouldn’t be a hard-cutoff distance. It would be a gradual change. But we think something more like 40 or 50 light years. So, an event at 150 light years should have some effects here but not set off a mass extinction.”

In addition to its distance, interstellar conditions at the time of a supernova would influence its lethality to biology on Earth.

“Cosmic rays like to travel along magnetic field lines,” Melott said. “They don’t like to cut across magnetic field lines as they experience forces to stop them from doing that. If there’s a magnetic field, we don’t know its orientation, so it can either create a superhighway for cosmic ray, or it could block them. The main interesting case did not assume the superhighway. It assumed that much of the magnetic field was blasted out by a series of supernovae, which made the Local Bubble—and we and the most recent supernovae were inside. This is a weak, disordered magnetic field. The best analogy I can think of is more like off-road driving.”

In such a case, the authors think cosmic rays from the supernova at 150 light years would have penetrated to Earth’s lower atmosphere.

“This is a much stronger thing,” he said. “The cosmic rays from the supernova would be getting down into the lower atmosphere—having an effect on the troposphere. All kinds of elementary particles are penetrating from altitudes of 45-10m, and many muons get to the ground. The effect of the muons is greater—it’s not overwhelming, but imagine every organism on Earth gets the equivalent of several CT scans per year. CT scans have some danger associated with them. Your doctor wouldn’t recommend a CT scan unless you really needed it.”

Melott said cancer and mutations would be the most obvious consequences for Earth’s biology of a supernova’s cosmic rays. With his co-authors— B.C. Thomas of Washburn University (2005 KU physics doctoral graduate and recent winner of the A. Roy Myers Excellence in Research Award), M. Kachelrieß of Institutt for fysikk in Norway, D.V. Semikoz of the Observatoire de Paris, Sorbonne Paris Cite in France and the National Research Nuclear University in Moscow, and A.C. Overholt (2013 KU physics doctoral graduate) of MidAmerica Nazarene University—Melott looked at the fossil record in Africa, the most geographically stable continent on earth during the Pleistocene, when a supernova was likely to have occurred.

“There isn’t a mass extinction, but there is kind of a lot of extinction going on at that time and species turnover,” he said. “It’s not quite severe enough to call it a mass extinction. There is some effect possibly connected to the supernova. That’s more difficult to say because there are many competing effects. Even in Africa you have climate change, and you don’t know if climate change is causing the effects you see or if a supernova has something to do with the climate change.”

In addition to cosmic rays, the team found a supernova would have caused blue light to shine in the sky at night for about a month.

“That’s been shown to be a fairly bad thing for almost all living organisms,” Melott said. “It throws off sleep and messes up your melatonin production. I would never want a blue LED alarm clock in my bedroom, for example. Blue LED streetlights have been shown to have bad effects in animals, causing behavioral changes. But this effect would only last a month or so. I think you would never see evidence in the fossil record.”

Atmospheric ionization would have been a more serious effect from a supernova, according to the KU researcher.

“Atmospheric ionization can help lightning get started,” Melott said. “When a cosmic ray comes down, it makes a path through the atmosphere, where it knocks electrons out of atoms, and that makes a pathway for lightning to get started. We’d expect to see a big increase with cloud-to-ground lightning. That would be good for some organisms and bad for others. Lightning is the number one cause of wildfires other than humans. So, we’d expect a whole lot more wildfires, and that could change the ecology of different regions, such as a loss of tree cover in northeast Africa, which could even have something to do with human evolution. The Great Plains has recently been largely kept grass-covered by a bunch of wildfires. A big increase in lightning would also mean a big increase in nitrate coming out of the rain, and that would act like fertilizer.”

Indeed, Melott said 2.6 million years ago there was in Africa a loss of tree cover and increase in grassland, possibly attributable to lightning-driven wildfires.”We think it’s possible that the cosmic rays may have had something to do with that,” he said.

Melott added he’s often asked by people if they should fear a supernova exploding close to Earth today.

“I tell them they should worry about global warming and nuclear war, not this stuff,” he said. “There’s nothing close enough to cause this kind of event in the very near future.”

The closest potential supernova is Betelgeuse, about 600 light years away, according to Melott.

“It’s much further away than this one we’ve been talking about,” he said. “It’s close enough to be spectacular in the sense that it would be bright and you’d see it in daytime, but there’d be no harmful effects.”

Flying cars fly into the market