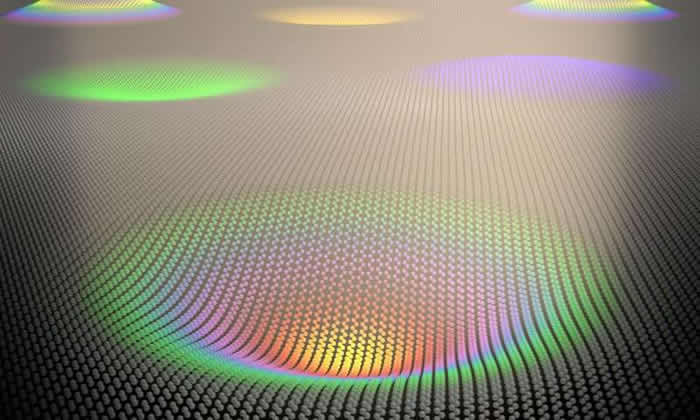 A new potential application for graphene has been found- mechanical pixels. Researchers from the Graphene Flagship discovered the application by applying a pressure difference across graphene membranes, and the perceived color of the graphene can be shifted continuously from red to blue.

This effect could be exploited for use as colored pixels in e-readers and other low-powered screens. The research was a collaborative effort from researchers at TU Delft, Netherlands, and Graphenea, Spain, and the study has recently been published in the journal Nano Letters.

The color change effect arises from interference between light waves reflected from the bottom of the cavity and the membrane on top. These reflected waves interfere constructively or destructively depending on the position of the membrane – either adding up or cancelling out different parts of the spectrum of white light. This interference enhances or reduces certain colors in the reflected light.

Dr. Samer Houri, a Researcher at TU Delft, led the exiting work and commented: “At the beginning, we did not pay attention to the colors of the membranes because graphene is ‘colorless’ when isolated.”

Houri added: “However, we observed Newton rings and noticed their color changing over time.”

When the membranes are extremely deformed, their color is no longer homogeneous, but instead circular rings appear. These rings are called Newton rings in honor of Sir Isaac Newton, who studied them in 1717.

Santiago Cartamil-Bueno, a Ph.D. student at TU Delft, who carried out the experimental work and was first to observe the change in color said: “Not only does this provide the colorimetry technique for characterizing suspended graphene, which is useful for companies developing graphene mechanical sensors, but it also provides a means to implement display technology based on interferometry modulation.”

Interferometry modulation, or IMOD, is employed in displays that have low-power consumption requirements, such as smart watches and e-books, and is increasing in importance for Internet of Things devices. Currently, such displays are composed of mechanical pixels made of silicon materials.

“By instead using graphene, with its extraordinary mechanical properties,” Cartamil-Bueno says, “a GIMOD (Graphene IMOD) could drastically improve the device performance, power consumption, pixel response time and failure rates, while enabling electrical integration and even flexible devices.” The researchers are now working to control the color of the membranes with electricity, and hope to have a screen prototype for the Mobile World Conference 2017 in Barcelona.