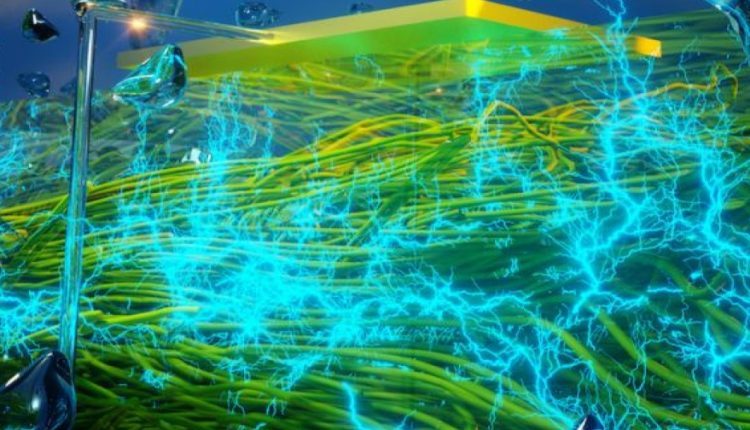 Picture a device that harnesses the power of natural protein to create electricity from moisture in the air.

That’s what scientists at the University of Massachusetts Amherst have developed, and they say it could have significant implications for the future of renewable energy, climate change and in the future of medicine.

They call the device an “Air-gen,” or air-powered generator. It has electrically conductive protein nanowires produced by the microbe Geobacter. The Air-gen connects electrodes to the protein nanowires in such a way that electrical current is generated from the water vapor naturally present in the atmosphere.

The new technology developed in Yao’s lab is non-polluting, renewable and low-cost. It can generate power even in areas with extremely low humidity such as the Sahara Desert. It has significant advantages over other forms of renewable energy including solar and wind, Lovley says, because unlike these other renewable energy sources, the Air-gen does not require sunlight or wind, and “it even works indoors.”

The Air-gen device requires only a thin film of protein nanowires less than 10 microns thick, the researchers explain. The bottom of the film rests on an electrode, while a smaller electrode that covers only part of the nanowire film sits on top. The film adsorbs water vapor from the atmosphere. A combination of the electrical conductivity and surface chemistry of the protein nanowires, coupled with the fine pores between the nanowires within the film, establishes the conditions that generate an electrical current between the two electrodes. 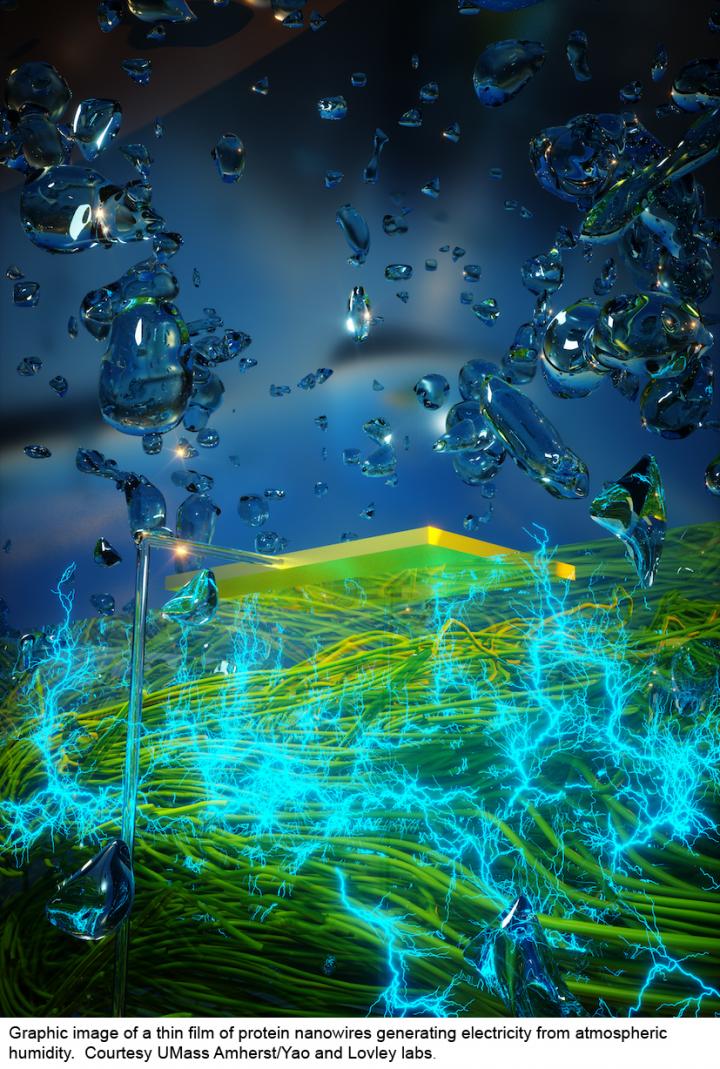 The researchers say that the current generation of Air-gen devices are able to power small electronics, and they expect to bring the invention to commercial scale soon. Next steps they plan include developing a small Air-gen “patch” that can power electronic wearables such as health and fitness monitors and smart watches, which would eliminate the requirement for traditional batteries. They also hope to develop Air-gens to apply to cell phones to eliminate periodic charging.

The ultimate goal is to make large-scale systems.

“For example, the technology might be incorporated into wall paint that could help power your home. Or, we may develop stand-alone air-powered generators that supply electricity off the grid. Once we get to an industrial scale for wire production, I fully expect that we can make large systems that will make a major contribution to sustainable energy production,” says Yao.

Continuing to advance the practical biological capabilities of Geobacter, Lovley’s lab recently developed a new microbial strain to more rapidly and inexpensively mass produce protein nanowires. “We turned E. coli into a protein nanowire factory,” he says. “With this new scalable process, protein nanowire supply will no longer be a bottleneck to developing these applications.”

The Air-gen discovery reflects an unusual interdisciplinary collaboration, they say. Lovley discovered the Geobacter microbe in the mud of the Potomac River more than 30 years ago. His lab later discovered its ability to produce electrically conductive protein nanowires. Before coming to UMass Amherst, Yao had worked for years at Harvard University, where he engineered electronic devices with silicon nanowires. They joined forces to see if useful electronic devices could be made with the protein nanowires harvested from Geobacter.