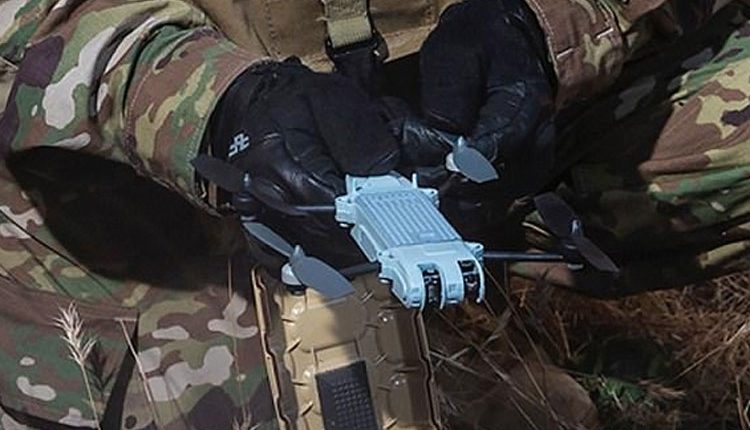 AeroVironment has unveiled a small four-rotor surveillance helicopter that can be carried in a small pouch and launched from the palm of a hand.

The smaller size and simplicity of operation means it can used by ordinary soldiers, offering squads and other small military units the kind of surveillance capacity previously reserved for larger military units, where drones are operated by specialists.

AeroVironment said it delivered 20 of the 5oz (140g) Snipe unmanned aircraft to its first US government client in April.

The company declined to identify the government agency that purchased the drones, but Aviation Week reported last year that AeroVironment was developing prototypes for the US Army.

AeroVironment said the drone benefited from advances in technology achieved in the development of its Nano Hummingbird drone for DARPA, the Defense Advanced Research Projects Agency, which has been responsible for many technological and scientific breakthroughs used by the military.

Kirk Flittie, AeroVironment’s Vice President in charge of unmanned aircraft systems, said in a statement the Snipe copter drone is ‘designed to be worn by its operator so it can be deployed in less than a minute.’

With its quiet electric motors, flight speeds exceeding 20mph and more than one-kilometer range, Snipe is difficult to detect in operating environments with even minimal ambient noise, its makers say.

Despite its small size, the durable nano-UAS is capable of operating under challenging environmental conditions – including winds of over 15mph with gusts up to 20mph.

Snipe is controlled using an intuitive app on a standard, ruggedized (MIL-STD 810) touch screen controller with intuitive user interface and automated operation for ease of use.

Other critical functions include Snipe’s ability to return to its operator automatically if it loses its radio link.

‘It is quick, quiet, fast, durable and packed with advanced features critical to helping our customers succeed in close-range missions.’

‘While Snipe’s stealthiness makes it ideally suited for military applications, it’s an invaluable asset for anyone needing a ‘Class 0′ UAS to support their missions,’ Flittie said.

Snipe benefits from advances in nano unmanned technology achieved by the company in its development of the internationally recognized Nano Hummingbird.

‘The Nano Hummingbird, the world’s first unmanned aircraft capable of propulsion and control using two flapping wings, is an example of how our breakthrough innovation has spawned a valuable new capability in Snipe that now will help our customers proceed with certainty,’ added Flittie.

The aircraft, which is intended intelligence and reconnaissance missions, can relay high-resolution images and record video both day and night.

It can fly at speeds of 20mph (35kph), has a range of more than a kilometer (half-mile), and can fly for about 15 minutes on batteries, the statement said.

AeroVironment’s hand-launched Raven unmanned aircraft, which weighs 4.2lbs (2kg) and has a wingspan of 4.5ft (1.4m), is one of the most widely used military surveillance drones, with more than 19,000 built.