Stable environmental conditions that differ significantly from other parts have been found on a long-lasting lake on ancient Mars, according to a comprehensive look at findings from the first three-and-a-half years of NASA’s Curiosity rover mission.

While previous work had revealed the presence of a lake more than three billion years ago in Mars’ Gale Crater, this study defines the lake’s chemical conditions and uses Curiosity’s powerful payload to determine that the lake was stratified.

Stratified bodies of water exhibit sharp chemical or physical differences between deep water and shallow water. In Gale’s lake, the shallow water was richer in oxidants than deeper water was.

“We’re learning that in parts of the lake and at certain times, the water carried more oxygen,” said Roger Wiens, a planetary scientist at Los Alamos National Laboratory and co-author of the study, published today in the journal Science. “This matters because it affects what minerals are deposited in the sediments, and also because oxygen is important for life. But we have to remember that at the time of Gale Lake, life on our planet had not yet adapted to using oxygen—photosynthesis had not yet been invented. Instead, the oxidation state of certain elements like manganese or iron may have been more important for life, if it ever existed on Mars. These oxidation states would be controlled by the dissolved oxygen content of the water.”

“These were very different, co-existing environments in the same lake,” said Joel Hurowitz of Stony Brook University, lead author of the report. “This type of oxidant stratification is a common feature of lakes on Earth, and now we’ve found it on Mars. The diversity of environments in this Martian lake would have provided multiple opportunities for different types of microbes to survive.” 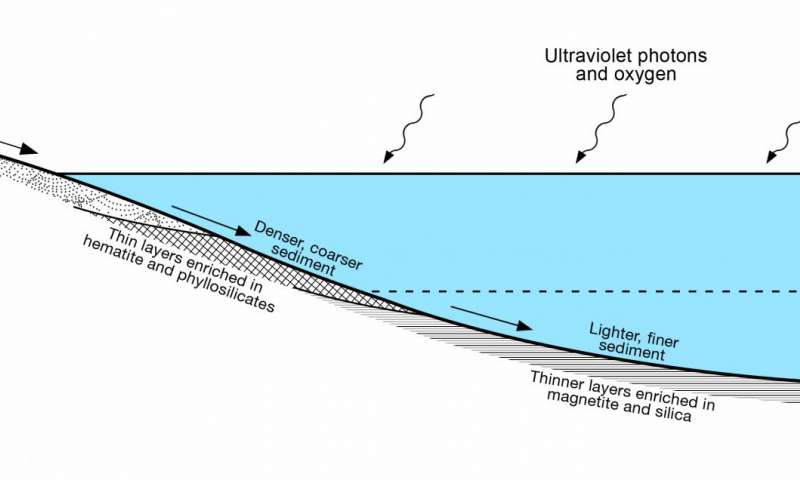 Whether Mars has ever hosted any life is still unknown, but seeking signs of life on any planet, whether Earth, Mars or more-distant icy worlds, begins with reconstruction of the environment to determine if it was capable of supporting life. NASA is using Curiosity to explore habitable environments on the ancient surface of Mars.

Over more than 1,700sols (martian days, which are 24 hours, 39 minutes long), Curiosity has traveled more than 16km from the bottom of Gale crater part way up Mount Sharp near the center of the crater.

Los Alamos National Laboratory developed the laser-shooting Chemistry and Camera (ChemCam) instrument that sits atop Curiosity in conjunction with the French space agency. Los Alamos’ work on discovery-driven instruments like ChemCam stems from the Laboratory’s experience building and operating more than 500 spacecraft instruments for national security. Scientists are using all the data collected by ChemCam and other on-board instruments to put together a more complete picture of the geological history of Mars.

Want to know how long you’ve got left to live? AI can tell you…

There are Milky Way-like Galaxies Amid the Young Universe