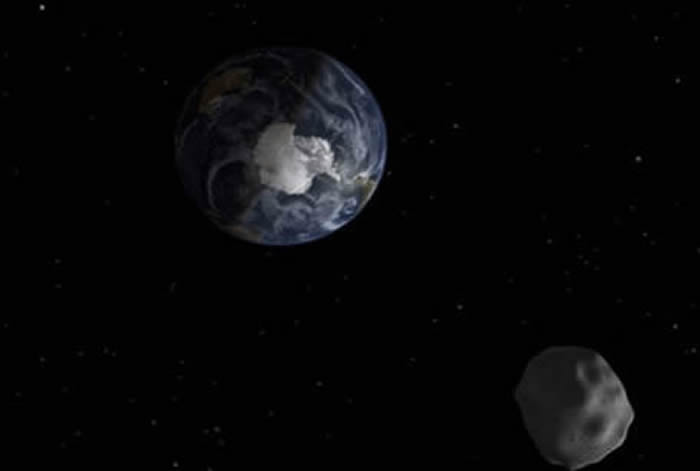 The smallest ever asteroid is also the brightest

Observations of the smallest asteroid ever characterized in detail, has been obtained by astronomers. At 2m (6ft.) in diameter, the tiny space rock is small enough to be straddled by a person in a hypothetical space-themed sequel to the iconic bomb-riding scene in the movie ‘Dr. Strangelove’.

Interestingly, the asteroid, named 2015 TC25, is also one of the brightest near-Earth asteroids ever discovered. Using data from four different telescopes, a team of astronomers led by Vishnu Reddy, an Assistant Professor at the University of Arizona’s Lunar and Planetary Laboratory, reports that 2015 TC25 reflects about 60% of the sunlight that falls on it.

Discovered by the UA’s Catalina Sky Survey last October, 2015 TC25 was studied extensively by Earth-based telescopes during a close flyby that saw the micro world sailing past Earth at 128,000km, a mere third of the distance to the moon.

In a paper published in The Astronomical Journal, Reddy argues that new observations from the NASA Infrared Telescope Facility and Arecibo Planetary Radar show that the surface of 2015 TC25 is similar to a rare type of highly reflective meteorite called an aubrite. Aubrites consist of very bright minerals, mostly silicates, that formed in an oxygen-free, basaltic environment at very high temperatures. Only one out of every 1,000 meteorites that fall on Earth belong to this class.

“This is the first time we have optical, infrared and radar data on such a small asteroid, which is essentially a meteoroid,” Reddy said. “You can think of it as a meteorite floating in space that hasn’t hit the atmosphere and made it to the ground — yet.”

Small near-Earth asteroids such as 2015 TC25 are in the same size range as meteorites that fall on Earth. Astronomers discover them frequently, but not very much is known about them as they are difficult to characterize. By studying such objects in more detail, astronomers hope to better understand the parent bodies from which these meteorites originate.

Scientists are interested in meteoroids because they are the precursors to meteorites impacting Earth, Reddy said.

The discovery also is the first evidence for an asteroid lacking the typical dust blanket – called regolith – of most larger asteroids. Instead, 2015 TC25 consists essentially of bare rock. The team also discovered that it is one of the fastest-spinning near-Earth asteroids ever observed, completing a rotation every two minutes.

Probably, 2015 TC25 is what planetary scientists call monolithic, meaning it is more similar to a “solid rock” type of object than a “rubble pile” type of object like many large asteroids, which often consist of many types of rocks held together by gravity and friction. Bennu, the object of the UA-led OSIRIS-REx sample return mission, is believed to be the latter type.

As far as the little asteroid’s origin is concerned, Reddy believes it probably was chipped off by another impacting rock from its parent, 44 Nysa, a main-belt asteroid large enough to cover most of Los Angeles.

“Being able to observe small asteroids like this one is like looking at samples in space before they hit the atmosphere and make it to the ground,” Reddy say. “It also gives us a first look at their surfaces in pristine condition before they fall through the atmosphere.”