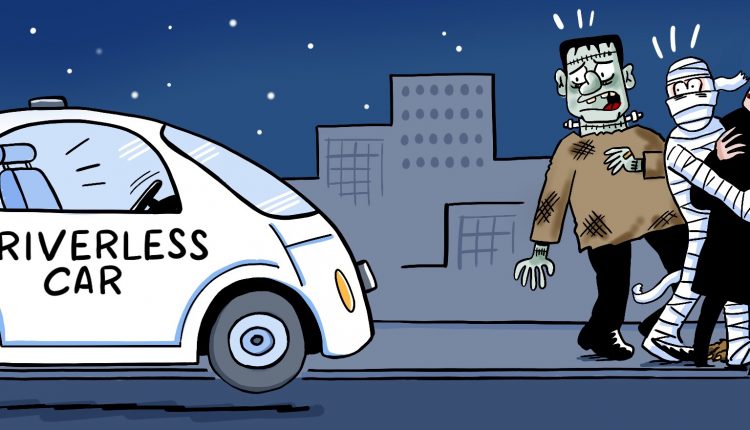 This Halloween You Should Be Afraid, Be Very Afraid

Forget vampires, ghouls and monsters under the bed. What’s really scary is the pace of technology hurtling towards us at 1,000mph.

This Halloween, we have enough scary things to occupy us, without adding to the terror with fake blood and glow-in-the-dark vampire teeth. For a start we are on the way to cars that drive themselves as if handled by an invisible man. Not to mention, flying monkeys robots and windows that suck solar energy with the enthusiasm of a failed-vegetarian vampire.

In Newquay, Cornwall in England, a supersonic car dubbed ‘The Bloodhound SSC’ will aim to crack the 1,000mph land speed record in tests at Cornwall Airport Newquay.

Ten years in development, this maiden test could pave the way for even more exciting future transportation.

With Hyperloop One boring through the earth and SpaceX commercializing flights in space – 2017 has certainly been the year of transportation evolution.

Has public perception evolved enough to accept these new methods of getting from A to B?

Would you feel safe enough to pop into the human-sized equivalent of a pneumatic postal delivery system to get to work? Or chop your commute in half by entrusting a computer with your life?

The other argument, is that human error is higher than that of a computer’s – which has advanced vision systems, quick reactions and can’t consume alcohol. So is the driverless car a glorified personal taxi service? For the hefty price tag attached, why shouldn’t I just get the bus? Well, privacy.

In our busy culture, personal space and privacy has become paramount, with commuters preferring to stare down at their phones, than converse with their fellow passenger.

Luxury is an important factor.

As driverless cars evolve, carmakers have to start thinking about the User Experience (UX). If we don’t have to drive anymore, what are we going to do?

The most likely answer is, go on your phone, work, watch Netflix – but for this you need the internet, screens, audio. The car turns into a living room. Comfort and connection will be the two deciding factors between a consumer’s choice between autonomous vehicles.

So let’s say that the consumer is convinced. They buy the driverless car, they commute in peace. They are free of stress, and maybe even get to watch the morning news. What happens if there is an accident?

The legality and the software is all still being developed and tested – but it still comes down to the fact that someone somewhere will have to decide how the autonomous vehicle will react in an unhappy circumstance. If the choice is between one person and another, one pedestrian or a vehicle – how will the vehicle make the decision – and whose fault will it be?

It’s all a bit scary.

ELIV: The Importance Of The UX In Automotive Innovation