US military to use laser weapons

Laser weapons are finally becoming reality in the US military, albeit with capabilities a little less dramatic than at the movies.

Lightsabers—the favored weapon of the Jedi in ‘Star Wars’ films—will remain in the fictional realm for now, but after decades of development, laser weapons are now here and are being deployed on military vehicles and planes.

The Navy has since 2014 been testing a 30kW laser on one of its warships, the USS Ponce.

Lockheed Martin has just announced a 60kW laser weapon that soon will be installed on an Army truck for operational testing against mortars and small drones.

The weapon can take out a drone from a distance of about 500 yards (meters) by keeping its beam locked onto the target for a few seconds, Jim Murdoch, an international business development director at Lockheed, told reporters this week.

But unlike in the movies, the laser beam is invisible to the naked eye.

By focusing the beam onto a target, the technology rapidly heats the inside of an incoming mortar round, causing it to explode mid-air. An impressive feat considering the round is moving at hundreds of miles per hour.

The laser weapon can also pierce the outer skin of a drone, taking out key circuits and making it crash.

For the moment, the lasers being tested are all of about this same power. 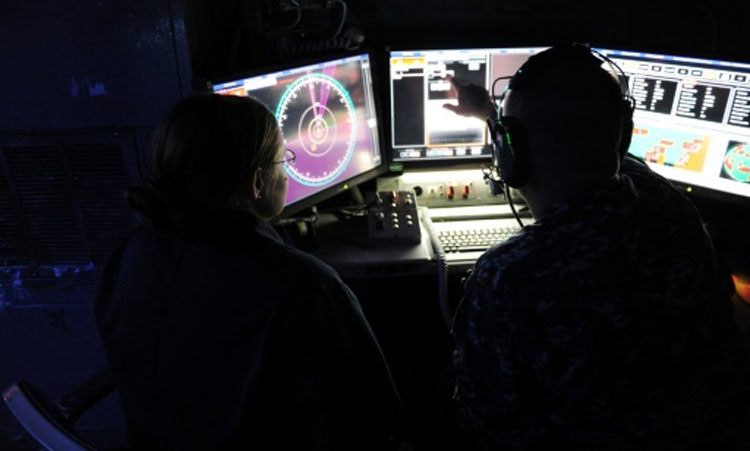 Mark Gunzinger, a senior fellow at the Center for Strategic and Budgetary Assessments, sees that relatively small output increasing rapidly.

Within just a few years, he expects far more powerful prototypes of more than 150kW.

Such a laser could knock out a missile sideways on, where it is most vulnerable.

He said special operations forces want to test such a system by 2020 on an AC-130 gunship that specializes in ground support for troops.

And within six to eight years, US forces could begin using laser systems of more than 300kW, he added.

That degree of power could knock out an incoming missile head-on. Eventually, reality will increasingly catch up with fiction.

The US military is also weighing the possibility of mounting lasers on drones flying at very high altitudes, making them capable of shooting down ballistic missiles shortly after launch.

Another bonus for the military from lasers is the promise of seemingly unending and cheap firepower.

Unlike conventional canons that need shells, laser canons are limited only by the amount of electricity that can be generated.

Gunzinger deems lasers as especially promising on warplanes, which could potentially get an unlimited reservoir of firepower to defend against adversaries’ missiles.

“An aircraft doesn’t have to return to base to upload more weapons. It could refuel and continue to operate with its nearly unlimited magazine,” he said.

But before laser technology can be integrated into combat planes, it must first be shrunk in size.

Currently engineers are running into physical limitations on how much portable power can be produced and ways of cooling the technology.

Lockheed wants to increase the power of its truck-mounted laser.

“For a vehicle like this, there will be some engineering limits,” said Murdoch.

“We will run out of space … that’s the kind of challenge we are working.”

But industry reps and military officials say there’s only one thing stopping lasers from garnering widespread operational use: government funding.

Congress is cautious. Lawmakers recall a lengthy program that cost more than $5bn in which a Boeing 747 was retrofitted to carry a laser gun supposedly capable of shooting down enemy missiles.

The program was scrapped in 2012 over concerns it could never be operationally viable.

The laser beam used in that technology was generated by chemicals so was not strong enough to take out a missile.

A Smile Isn’t Just a Smile: How Nonverbal Signals Can Promote Co-operation