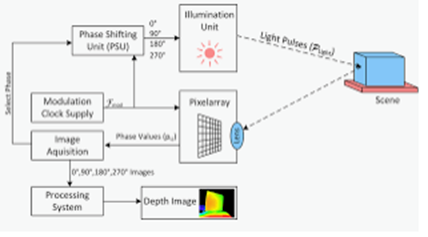 3D Imaging Platform’s Optical Fibers As Small As A Hair

Using fibers roughly the width of a human hair, researchers created a 3D imaging system with applications ranging from remote inspection of small or dangerous machines to a miniaturized and minimally invasive endoscopic tool. Their report delivers a proof-of-concept prototype for a 3D imaging system using multimode optic fibers (MMFs) rather than bulk optics.

MMFs are highly efficient at transporting light. Their design allows them to carry thousands of light rays or modes, each of which can act as independent information channels within a tiny area. Because of these features, they are ideal for high-resolution 3D imaging systems. One way to reconstruct a 3D scene is using time-of-flight 3D imaging via lasers.

Creating such systems using MMFs is challenging as optical signals are subject to scrambling, which distorts images. In their new study, Daan Stellinga et al. break through the limitations. The authors developed a 3D imaging system capable of scanning a scene at nearly 23,000 points per second with depths several meters beyond the end of a ~40-centimeter-long fiber. The system also recorded near-real-time 3D video at a frame rate of nearly 5 hertz. Find the Time of Flight 3D imaging through multimode optical fibers article at: 10.1126/science.abl3771