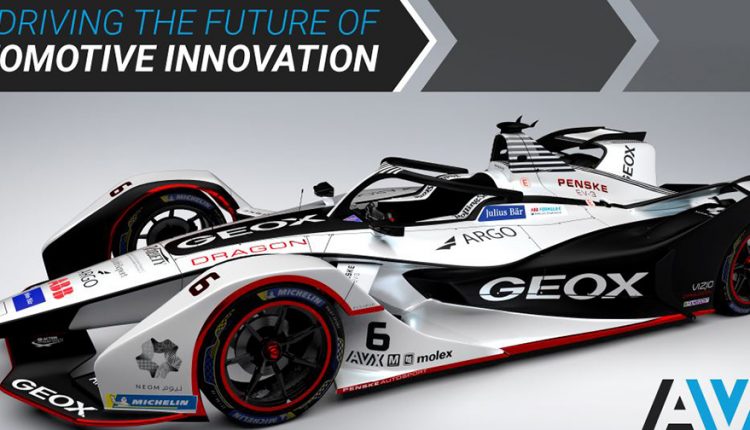 It has been announced that AVX Corporation is sponsoring the GEOX DRAGON Formula-E racing team in partnership with Mouser Electronics, TTI, and Molex. The world’s first and only racing series with all-electric vehicles, the ABB FIA Formula-E Championship is a fusion of engineering, technology, sport, science, design, music, and entertainment.

The racing series is firmly rooted in the three core values of energy, environment, and entertainment, and designed to help drive the change towards an all-electric future by accelerating global interest in electric vehicle technology.

The Formula-E championship is comprised of 13 races that take place in 12 cities across five continents. Season five kicked off in Ad Diriyah, Saudi Arabia, on Sunday, December 16th, 2018, and will take its final lap in New York City on Sunday, July 14th, 2019. The most recent race took place on February 16th, in Mexico City, where GEOX DRAGON drivers José María ‘Pechito’ López and Felipe Nasr took to the 2.093km Autódromo Hermanos Rodríguez track in pursuit of an electric finish and new accolades.

Alex Schenkel, AVX’s Senior Vice President of Global Sales, stated: “The all-electric Formula-E racing circuit serves as both a catalyst and proving ground for the innovative electronic components and systems responsible for both the edge-of-your-seat excitement that has earned the sport legions of global fans and for inspiring critical performance, efficiency, and safety improvements responsible for making this technology more enticing to consumers and steering the automotive industry towards an all-electric future.

“We at AVX are thrilled to partner with Mouser, TTI, and Molex to support this cutting-edge, all-electric racing technology and to showcase sustainability in a platform with so much global excitement and appeal. We wish the GEOX DRAGON team and all the Formula-E fans a fast-paced season of good, clean (energy) fun.”

Todd Mcatee, Vice President, Americas Business Development for Mouser Electronics, added: “Formula-E cars require the latest sustainable and, most importantly, high-performance components to gain a competitive edge. By teaming up with AVX, TTI, and Molex to sponsor Formula-E, Mouser shows its commitment to keeping engineers up to date with innovative technologies.”

AVX supports the advancement of electric vehicle technology with innovative electronic component, interconnect, sensor, control, and antenna solutions designed to provide peak performance in powertrain, active body control, advanced driver assistance system, lighting, power conversion, and drive control systems. Other recent company-wide efforts to support increased environmental sustainability include a new a 908kW solar energy parking canopy that began operation at its corporate headquarters in Fountain Inn, South Carolina, this January and is expected to generate 1.3GWh of clean, green power, the equivalent of more than one million pounds of burned coal, by the end of 2019.

To support the GEOX DRAGON Formula-E racing team, visit FANBOOST to vote for drivers José María “Pechito” López and Felipe Nasr and follow hashtag #AVXFormulaE and #FANBOOST on social media. The five drivers with the most FANBOOST votes cast in their favor all the way up until 15 minutes into each race are awarded a significant five-second burst of power that they can deploy in the second half of each race.

Lithium-Air Batteries Can Store Energy for Cars, Houses and Industry

Sensor that can hear your brain whisper