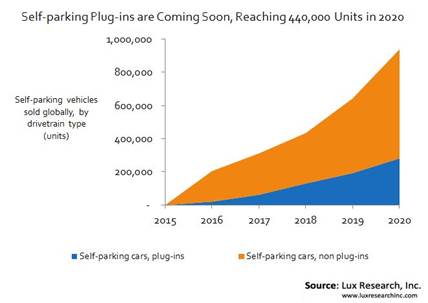 Autonomous Features in Electric Vehicles Can Save $1,800 in Battery Costs

Specifically, plug-in vehicles can save up to $1,800 in battery costs, or extend driving range by 24 miles with the addition of autonomous features like self-parking, according to Lux Research.

Recently multiple academic studies indicate that autonomous features – including self-parking, expected as early as 2016 – may boost fuel efficiency by as much as 10%, when compared with human drivers. This translates into $1,800 in battery cost savings in a Tesla, or an addition of 24 miles to driving range.

“Many buyers of electric cars, such as those who buy the expensive Tesla Model S, are willing adopters of more autonomous driving technology,” said Maryanna Saenko, Lux Research Analyst and lead author of the report titled, “Electric Car, Drive Thyself: How Autonomous Systems and Plug-in Vehicles Will Converge.”

“But as these autonomous features help improve the driving efficiency of plug-in vehicles, and boost charging efficiency with self-parking capabilities, they will help to bring electric vehicles to a wider audience as well.” 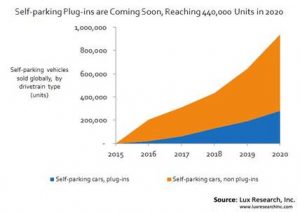 Lux Research analysts examined how automakers are combining recent innovations. Among their findings:
• Self-parking EVs arrive in 2016. Self-parking EVs will slowly hit the market in 2016, led by Tesla and BMW. From a small base of 20,000, or 10% of all self-parking cars, these will reach 440,000 units in 2020, driven by a drop in price and benefits of the technology.
• Wireless charging is coming soon. Starting with the Audi Q7 e-tron Quattro in 2016, EVs will begin to offer wireless charging as an additional-cost option. Self-parking EVs help solve a critical problem in wireless charging, since misaligned parking by humans leads to slower charging speed.
• More batteries are needed in new cars. Increased levels of autonomy will require extra batteries inside the car for safety and redundancy. With a dedicated battery of about 1 kWh in size, costing $350, to power autonomous features, the newer EVs will lead to $2.5 billion in additional sales of lithium-ion batteries in 2030.

The report, titled “Electric Car, Drive Thyself: How Autonomous Systems and Plug-in Vehicles Will Converge,” is part of the Lux Research Autonomous Vehicles 2.0 Intelligence and the Energy Storage Intelligence services.

What Happens to Self-Driving Trucks in a Critical System Failure?