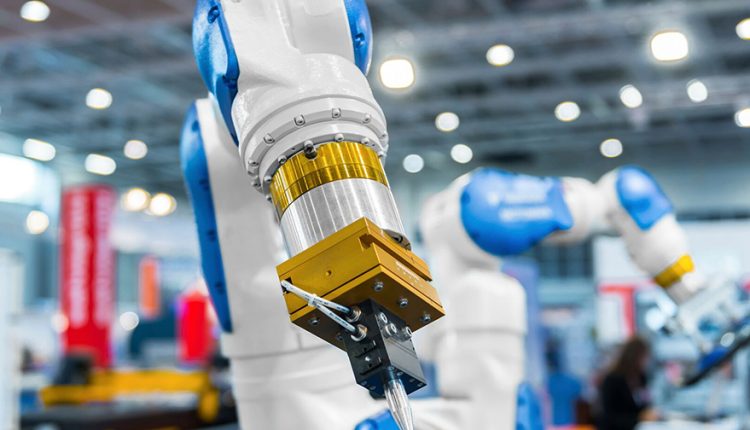 The safety implications as robots work ever-closer with humans

In industrial production, smart machines have been integral to many plants for a long time. It is generally accepted that industrial robots date back to around 1960, with General Motors installing their first one at the Trenton New Jersey plant in 1961 for spot welding and handling die castings. This was a ‘Unimate’ robot arm developed by the company Unimation, and it weighed about two tonnes, but it was remarkably accurate.

Over the past few years, rudimentary robots have also been welcomed into our homes, performing chores such as cleaning, and we are now entering the next era where machines are working with people in an industrial setting. Indeed, the Industrial Federation of Robotics (IFR) forecasts that 1.7 million new robots will transform the world´s factories by 2020. In terms of units, the IFR estimates that by 2020 the worldwide stock of operational industrial robots will increase from about 1,828,000 units at the end of 2016 to 3,053,000 units.

The automotive industry has been the single largest driver of the robotics industry worldwide for decades. Today, automotive original equipment manufacturers (OEMs), as well as other tier suppliers, are making use of new collaborative robot technologies. The challenge is to guarantee safety, and minimise the chance of injury when people and machines work together. Such collaborative robots must be equipped with a range of new qualities, particularly in their ability to react much better to the environment and particular situations than previous models could.

Collaborative robots, sometimes referred to as cobots, are expanding the possibilities of automation, as they are often easier to deploy and use and are a core element of Industry 4.0. As obstacles like system interoperability are overcome, manufacturers will integrate increasing numbers of robots factory-wide. Consequently, more flexible production automation will become increasingly accessible to a wider number of businesses.

ISO 8373 defines an industrial robot as, ‘An automatically controlled, reprogrammable, multi-purpose manipulator programmable in three or more axes, which may be either fixed in place or mobile for use in industrial automation applications.’

As part of this fourth industrial revolution, cobots are designed to work alongside humans in a ‘collaborative workspace, an area where the robot and the human can perform tasks simultaneously. This means that unlike more traditional machines, which are ‘caged’ by a guarding mechanism, collaborative robots often operate in the human occupied workspace without safety fencing. However, not all collaborative robots are guard-free, depending on their function and related safety requirements. Besides the robot itself, the collaborative robot might include an ‘end effector’, that is the tool adapted on the robot arm with which the robot performs tasks, and the objects moved by it. In tandem with this new way of working, there of course comes new safety concerns.

As well as manufacturing, there are many other sectors where such a collaborative operation delivers distinct advantages, including:

Where robots are used during various medical procedures including surgery.

Where robots perform tasks such as assistance with mobility.

Both domestic and professional applications.

For example on the International Space Station

The increased need for adequate protection of people from the safety risks associated with industrial robot systems led to the development of EN ISO 10218:2011, an international and European standard which covers the safety requirements for industrial robots. The standard replaced the 2006 version, and is in two parts:

In order to ensure that humans are not exposed to unacceptable risks when working collaboratively, the current standards describe four separate measures that can be used to provide risk reduction. It is required that at least one of these is fulfilled, in addition to having visual indication that the robot is in collaborative operation.

The four measures are:

This measure requires that when it is detected that a human has entered the collaborative workspace, the robot should be stopped. The stop condition should then be maintained until the human leaves the workspace.

In this mode the human can guide the robot at the end effector by hand. Additional requirements for safety include safe limited speed monitoring, a local emergency stop, and the use of an enabling device, which is a three position device that has to be held in the centre position.

In this mode, the robot must maintain a specified separation distance from the human and operate at a predetermined speed. This measure requires careful risk assessment and needs to take account of safety distances, which should include the consideration of approach speeds of parts of the human body as described in EN ISO 13855.

4. Power and force limiting by inherent design or control

In this mode the power and force of the robot actuators need to be monitored by safety related control systems to ensure that they are within the limits established by a risk assessment.

It is required that at least one of these requirements needs to be fulfilled, in addition to having visual indication that the robot is in collaborative operation. In all four of the measures described above, the safety related control system that provides this functionality needs to meet either:

While EN ISO 10218 contains some guidance on the use of collaborative robots, with the rapid pace of technological development, it was widely acknowledged that this guidance needed to be enhanced.

The methods of collaborative working ‘speed and separation monitoring’ and ‘power and force limiting’ are particularly elaborated on in ISO/TS 15066. This includes recommendations for ‘biomechanical limits’ of pain thresholds for specific parts of the human body.

The rationale for creating biomechanical limits was established in conjunction with testing conducted by the University of Mainz (Germany). Testing was conducted using 100 healthy adult test subjects on 29 specific body areas, and for each of the body areas, pressure and force limits for quasi-static and transient contact were established evaluating onset of pain thresholds.

There are also working groups of the standards organisations reviewing various aspects of human machine interactions, which will also inform the development of future standards. However, for now, EN ISO 10218 Parts 1 and 2, and the ISO/TS 15066 specification defines the safety requirements for the sphere of collaborative robots, with the most relevant published guidance being contained in EN ISO 10218.

The introduction to the HSE report states that, ‘this study explored the safety, reliability and evidence for the force limits defined by the draft TS 15066, and of the methods for testing them. It also addressed whether the proposed approach in the draft TS 15066 is likely to adequately protect people from the risks. Risk assessment of potential collision scenarios, human reliability and behaviour issues, and equipment failure modes and rates are discussed, as is the adequacy of personal protective equipment against collision injuries.’

The report identifies several areas that the HSE considers need more consideration within ISO/TS 15066. For example, it concludes that the psychological, behavioural and organisational aspects affecting the level of human-robot collision risk, along with the effects of human movement velocities, are not strongly represented in ISO/TS 15066. The HSE also points out that the frequency of injury is not included in the criteria for acceptable collision limits.

The cobot sees the dawn of robotic systems that can safely interact with human workers while effectively performing simple industrial tasks. While the advent of the cobot offers exciting possibilities for industry, some end-effectors may create hazards, especially as contact between the collaborative robot and the operator can lead to the possibility of collision. It is therefore vital that a complete risk assessment is undertaken before a cobot is deployed, as you would with any machinery in the workplace. This must cover the intended use of the cobot, as well as any reasonably foreseeable misuse, with the basis for this risk assessment being EN ISO 12100, in order to provide a presumption of conformity with the Machinery Directive.

Time to make that call

Could global positioning be in every new wearable?