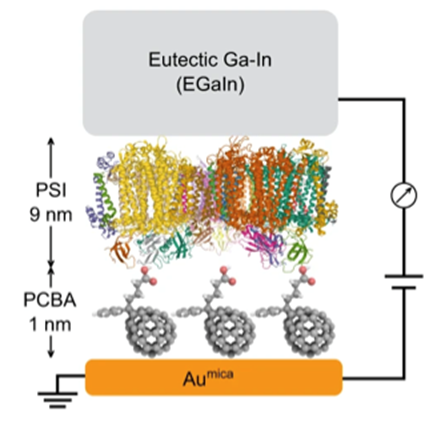 Molecular circuits are challenging because as circuit size decreases, they become unreliable. On a circuit with two wires that are one nanometer apart, the electron can “tunnel” between the two wires and effectively be in both places simultaneously, making it difficult to control the direction of the current.

The team built the circuits by placing two different types of fullerene cages on patterned gold substrates and submerged the structure into a solution of photosystem one (PSI), a commonly used chlorophyll protein complex. This induced PSI proteins to self-assemble on the surface in specific orientations, creating diodes and resistors once top-contacts of the gallium-indium liquid metal eutectic, EGaIn, are printed on top. This process both addresses the drawbacks of single-molecule junctions and preserves molecular-electronic function.

The researchers created simple diode-based AND/OR logic gates from these circuits and incorporated them into pulse modulators, which can encode information by switching one input signal on or off depending on the voltage of another input. The PSI-based logic circuits were able to switch a 3.3 kHz input signal – which, while not comparable in speed to modern logic circuits, is still one of the fastest molecular logic circuits yet reported. Work on the proof of concept results continues. The research appears in Nature Communications. Co-authors Chiechi and Qiu were formerly at the University of Groningen, the Netherlands.