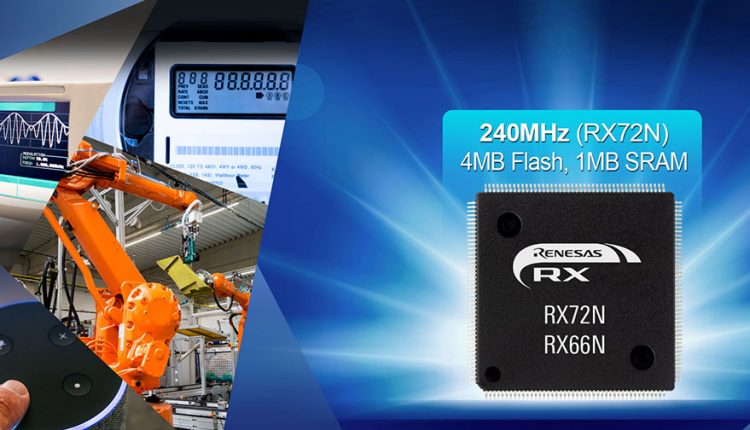 Renesas Electronics has announced the RX72N Group and RX66N Group of 32-bit microcontrollers (MCUs), new additions to the RX Family that combines equipment control and networking function on a single chip.

In the industrial equipment market, performance and functionality improvements lead to larger program code sizes. As a result, storage capacity and read speed play key roles in determining real-time performance. The new RX72N and RX66N devices offer up to four megabytes (MB) of on-chip flash memory that perform read operations at a frequency of 120 MHz, among the fastest in the industry, as well as 1 MB of on-chip SRAM.

This ample on-chip memory eliminates the need for external memory, which has slower read speeds, and makes it possible to extract the full performance capacity of the CPU. In addition, larger memory capacity enables high-resolution graphics support, such as WVGA, on a single chip, which was not possible on earlier general-purpose MCUs.

With this combination, the MCUs can implement single-chip equipment control and networking function, enhancing the real-time performance of applications such as industrial robots, general-purpose inverters, programmable logic controllers (PLCs), and remote I/O devices. They also make it possible to improve the exterior design and operability of a wide range of industrial automation equipment.

“The RX Family provides a high level of hardware and software inter-compatibility, making it easy for customers to build a development platform that scales from low-end to high-end products. This year marks the ten year anniversary of RX. We are planning a range of activities to appreciate our loyal RX customers and dedicated partners, which includes the launch of new products such as RX72N and RX66N. We are committed to continue to strengthen RX lineups for many more years to come.

The new product lineup features industry-leading capacities of 4 MB flash memory and 1 MB SRAM, with pin count packages ranging up to 224 pins, including a maximum of 182 general-purpose input/output (GPIO) ports. By enabling single-chip implementation where it previously required additional components such as a sub-MCU or external memory, the new MCUs reduce the component mounting area required on the circuit board for smaller form factors.

The RX72N Group and RX66N Group incorporate an arithmetic unit for trigonometric functions (sin, cos, arctan, hypot; RX72N only) that accelerates motor vector control and a register bank save function that decreases the interrupt response time. This reduces the CPU load required for closed-loop control and simplifies the implementation of additional functions such as networking capabilities.

The RX72N Group and RX66N Group incorporate an LCD controller, 2D drawing engine, and serial sound interface. They can support high-resolution displays — WVGA (800 × 480) at 8-bit colors or WQVGA (400 × 240) at 16-bit colors — without the need for external memory. When used in combination with voice recognition or noise reduction middleware, they also enable customers to add voice control function to their products, making them ideal for applications such as network-connected LCD-equipped controllers or smart speakers.

Renesas also introduced the RX72N Envision Kit to further reduce common barriers to development. The evaluation board makes it easy to experiment with an array of functions, including:

The RX72N Group and RX66N Group of MCUs are available now. The RX72N Envision Kit is also available now, priced at $60 USD per unit.