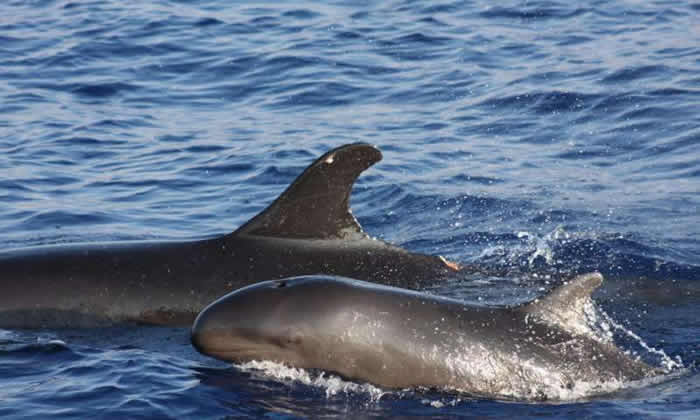 How Hawaiian false killer whales remove fish from longline fishing gear has for the first time been observed by a team of researchers and fishermen.

The team, coordinated by Scripps Institution of Oceanography at the University of California San Diego scientist Aaron Thode, used video and audio recordings to observe false killer whales removing fish from a longline fishing hook, a behavior known as depredation.

They gained new insight into a behavior that has caused false killer whales to entangle with fishing gear at rates deemed unsustainable by the U.S. National Marine Fisheries Service.

False killer whales dine on popular game fish like yellowfin tuna and mahi-mahi. Their foraging efforts take them to the same open-ocean regions where commercial fishermen set 30-60km (19-37mile) long fishing lines to catch the same fish. This competition for fish has led false killer whales, actually a member of the dolphin family, to occasionally end up as an unintended catch of the fishing operations.

To observe false killer whales removing fish from hooks, the Alaskan and Hawaiian research team deployed an underwater camera, sound recorder, and vibration detector on long-line fishing gear deployed by fishing vessels off Hawaii. The researchers were interested in learning more about the animals’ behavior, such as what attracts them to the gear, whether they make sounds as they approach, and if they removed bait or the targeted species from the hook. They were also interested in measuring how far away the animals could be heard to provide new information into future passive acoustic surveys of the population.

“This study addresses some important questions about the nature of this depredation, and whether underwater sound can be used to study or possibly alleviate the issue,” said Thode, a Researcher with the Scripps Marine Physical Laboratory and lead author of the paper.

During the 30sec encounter captured on video, the scientists found that the false killer whale made distinct clicks and whistles as it approached the longlines and took baitfish off the hook. Vibrations on the fishing line when the animal removed three fish also helped the researchers estimate how far away the animal was from the recorder to calculate how loud the animal’s sounds were.

The research team, part of a collaborative effort between the Southeast Alaska Sperm Whale Avoidance Network (SEASWAP), the National Marine Fisheries Service, Pacific Islands Fisheries Science Center, and members of the Hawaii Longline Association, has collectively been studying marine mammal and fishery interactions for more than a decade.

Entanglements between fishing gear and offshore false killer whales, which are typically found in groups of 10-50 individuals, have occurred in Hawaii often enough that the population has been designated a ‘strategic stock’ under the Marine Mammal Protection Act. This designation led to a federal take-reduction strategy for reducing the negative impact to the population from the unintentional catch of the threatened species.

“Further acoustics studies could help us understand more about these animals’ behavior, which could be used by fishermen to hear the animals make these whistles or echolocation noises before they deploy their gear,” said Thode. “The study can also be helpful in designing future experiments to estimate the actual number of animals in the region.”

Thode also suggested that the tugs and jerks that a given species makes on the fishing line could differ from other species, and might lead to new ways to recognize and reduce by-catch, protecting both animals and fishermen from unintentional encounters.

Janice Straley, Professor of Biology at the University of Alaska Southeast and a Co-Author of the study said: “This was a true collaborative effort with fishermen, fisheries managers and scientists from across the North Pacific working together that made this project a success.”

Straley added: “Fishermen modified techniques used for depredation in Alaska for use in Hawaii and everyone worked on design and implementation.”

The research team hopes that this study may help test the concept of a so-called ‘smart hook’ to reduce the impacts to the animals and fishing operations.

The Right Cup: It’s a matter of taste

Breaking the recycling barrier in packaging