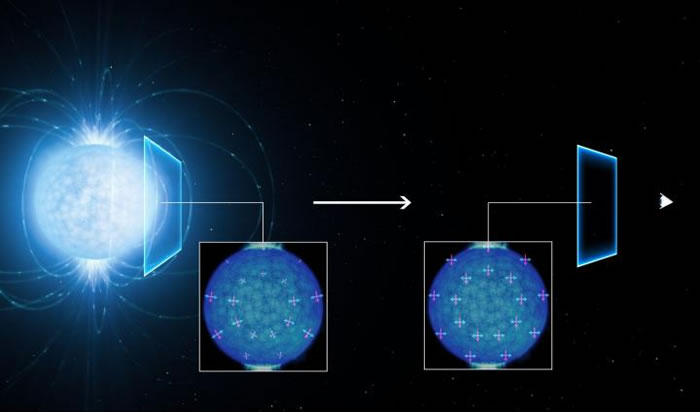 To observe the neutron star RX J1856.5-3754, about 400 light-years from Earth, a team led by Roberto Mignani from INAF Milan (Italy) and from the University of Zielona Gora (Poland), used ESO’s Very Large Telescope (VLT) at the Paranal Observatory in Chile.

Despite being amongst the closest neutron stars, its extreme dimness meant the astronomers could only observe the star with visible light using the FORS2 instrument on the VLT, at the limits of current telescope technology.

Neutron stars are the very dense remnant cores of massive stars – at least 10 times more massive than our Sun – that have exploded as supernovae at the ends of their lives. They also have extreme magnetic fields, billions of times stronger than that of the Sun, that permeate their outer surface and surroundings.

These fields are so strong that they even affect the properties of the empty space around the star. Normally a vacuum is thought of as completely empty, and light can travel through it without being changed. But in Quantum Electrodynamics (QED), the quantum theory describing the interaction between photons and charged particles such as electrons, space is full of virtual particles that appear and vanish all the time. Very strong magnetic fields can modify this space so that it affects the polarization of light passing through it.

Mignani explains: “According to QED, a highly magnetized vacuum behaves as a prism for the propagation of light, an effect known as vacuum birefringence.”

Among the many predictions of QED, however, vacuum birefringence so far lacked a direct experimental demonstration. Attempts to detect it in the laboratory have not yet succeeded in the 80 years since it was predicted in a paper by Werner Heisenberg (of uncertainty principle fame) and Hans Heinrich Euler.

“This effect can be detected only in the presence of enormously strong magnetic fields, such as those around neutron stars. This shows, once more, that neutron stars are invaluable laboratories in which to study the fundamental laws of nature.” says Roberto Turolla (University of Padua, Italy).

After careful analysis of the VLT data, Mignani and his team detected linear polarization – at a significant degree of around 16% – that they say is likely due to the boosting effect of vacuum birefringence occurring in the area of empty space surrounding RX J1856.5-3754.

Vincenzo Testa (INAF, Rome, Italy) comments: “This is the faintest object for which polarization has ever been measured. It required one of the largest and most efficient telescopes in the world, the VLT, and accurate data analysis techniques to enhance the signal from such a faint star.”

“The high linear polarization that we measured with the VLT can’t be easily explained by our models unless the vacuum birefringence effects predicted by QED are included,” adds Mignani.

Mignani is excited about further improvements to this area of study that could come about with more advanced telescopes: “Polarization measurements with the next generation of telescopes, such as ESO’s European Extremely Large Telescope, could play a crucial role in testing QED predictions of vacuum birefringence effects around many more neutron stars.”

“This measurement, made for the first time now in visible light, also paves the way to similar measurements to be carried out at X-ray wavelengths,” adds Kinwah Wu (UCL/MSSL, UK).

Using Netflix to tackle a problem in astrophysics