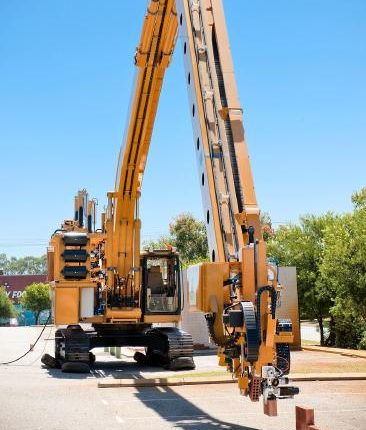 For over 6,000 years people have been manually laying bricks to construct buildings. As a result, building a house can be a long, drawn-out process.

Well, why not automate the process like we automate everything else these days? An Australian company named Fastbrick Robotics created by Mark Pivac came up with just the solution.

Fastbrick robotics calls its brick-laying robot Hadrian after the Roman emperor who played a big role in much of Rome’s construction. Hadrian was the idea of Australian aeronautics and mechanical engineer who was inspired by a brick layer crisis in 2005.

The robot can lay up to 1,000 bricks per hour and potentially build 150 houses a year.

After 10 years, the robot has finally come to fruition. Hadrian has a 28-foot robotic arm and works using 3D computer-aided design files to map out the cuts, routes and positions of the bricks assisted by a 90-foot telescopic boom.

Hadrian’s navigation system allows for brick manipulation within 0.5-mm accuracy regardless of outside interference. It’s versatile, too, so it can work on almost any block size, even multi-unit developments.

According to the company, the 3D robotic system is so accurate that it allows other construction trades to pre-fabricate from the CAD design and install into their own systems.

Other potential applications for Hadrian include freeways noisewalls, high-rise infill and other commercial possibilities.

The robotic alternative to home-building means more flexibility, as well as a positive financial impact.

What is a cable?