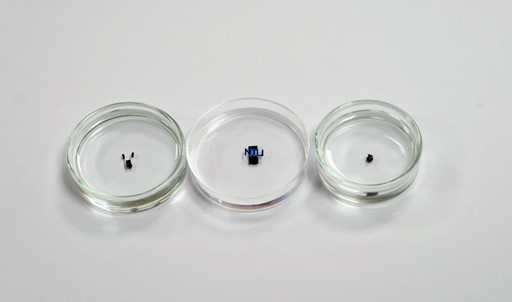 Scientists at Nanyang Technological University, Singapore (NTU Singapore) have developed millimeter-sized robots that can be controlled using magnetic fields to perform highly maneuverable and dexterous manipulations, possibly for applications in biomedicine and manufacturing.

The miniature robots were created by embedding magnetic microparticles into biocompatible polymers, non-toxic materials that are harmless to humans. The robots are then ‘programmed’ to execute functions when magnetic fields are applied.

The robots are an improvement over many existing small-scale robots in that they optimize their ability to move in six degrees-of-freedom (DoF), translational movement along three spatial axes, and rotational movement about those three axes, commonly known as roll, pitch and yaw angles. The robots can rotate 43 times faster than them in the critical sixth DoF when their orientation is precisely controlled. They can also be made with ‘soft’ materials and thus can replicate important mechanical qualities such as swimming and gripping.

The research by the NTU team was published in the peer-reviewed scientific journal Advanced Materials in May 2021 and is featured as the front cover of the June 10 issue.

Approximately the size of a grain of rice, the miniature robots may be used to reach confined and enclosed spaces currently inaccessible to existing robots, say the NTU team, making them particularly useful in the field of medicine.