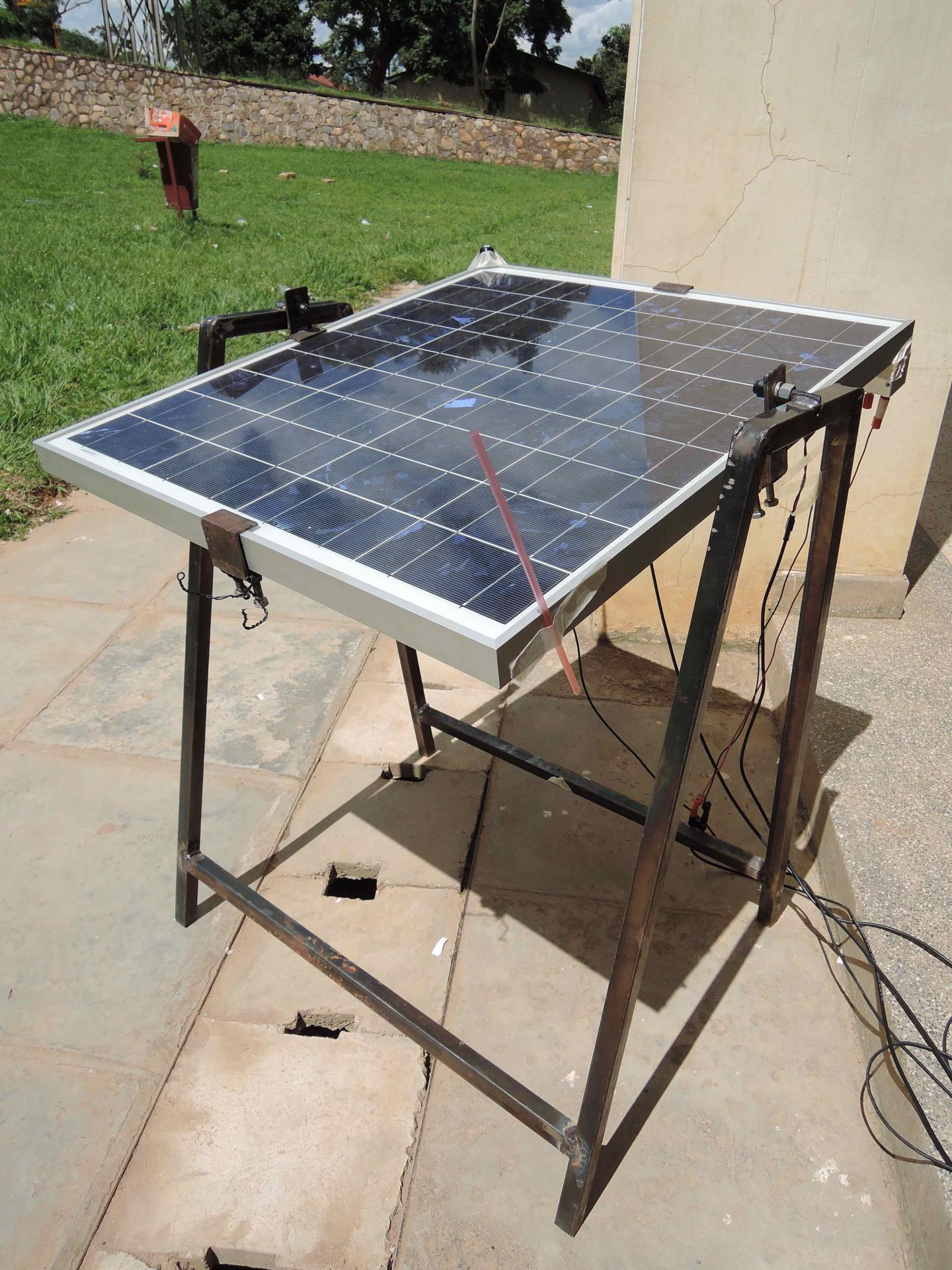 How a Bucket of Water Can Improve Solar Cell Efficiency

Colgate University researcher on a Fulbright fellowship in Uganda designs a simple frame that allows a solar cell to track the sun's path across the sky.

Looking at your cell phone, you realize the battery is low, which means you have to make another long walk into town to pay money to charge the device. By the time you get home, it’s getting dark. You light the kerosene lamp that casts a dim glow across the room. A significant amount of your income is burned by the lamp, and it emits noxious gases. Breathing the same air as your burning lamp can be equivalent to smoking several packs of cigarettes a day.

This may seem like a fictitious story to those in first-world countries, but it’s a common reality for many people living in the developing world. Now a possible solution has been proposed by a Colgate University researcher. Beth Parks suggests using off-grid renewable energy sources like solar to generate electricity for lighting and charging on site.

During the 2019 American Physical Society March Meeting in Boston, Beth Parks presented a design that her team created that increases the amount of sunlight captured by a solar cell, enhancing its energy production by almost one-third.

“In Uganda, between 20 to 25% of people have no access to electricity,” said Parks, an associate professor at Colgate University. “One solar cell supplies enough energy to power lights and charge cell phones and radios. This is a huge quality-of-life improvement.”

While solar panels offer a clean source of renewable energy, they are typically mounted on a fixed frame and only optimally oriented toward the sun during specific hours of the day.

Parks previously saw a design for a frame that would allow the solar panel to track the sun using hanging weights. But the design had not been tested to see how it actually performed. Nor had it been optimized for affordability to ensure commercial viability and adoption.

During her year on a Fulbright fellowship in Uganda, she worked with students at the Mbarara University of Science and Technology to design a frame using metal tubing that a local welder could easily obtain and assemble.

“We have created a frame using inexpensive materials that allows the solar panels to track the arc of the sun throughout the day,” Parks said. “This approach could make solar energy more affordable to households and small businesses in the developing world.”

Parks and her team tested the design on 20 random days in Uganda. The solar cell on the movable frame captured 30% more sunlight than the stationary solar cell at the same location.

“If this frame is adopted, it has the potential to create a small industry for the local community,” Parks said.

According to Parks, the cost of the system — the solar cell, battery, charger and frame — is about 10% less than a comparable rooftop solar cell system. This astonishingly simple, inexpensive and ingenious method could increase solar energy captured for people in developing countries, as well as remote regions that are off the grid.

SiC Adoption is Accelerating: is the Industrial Supply Chain Ready?

AI for Robotic Prosthetics Can Help Account for Terrain…