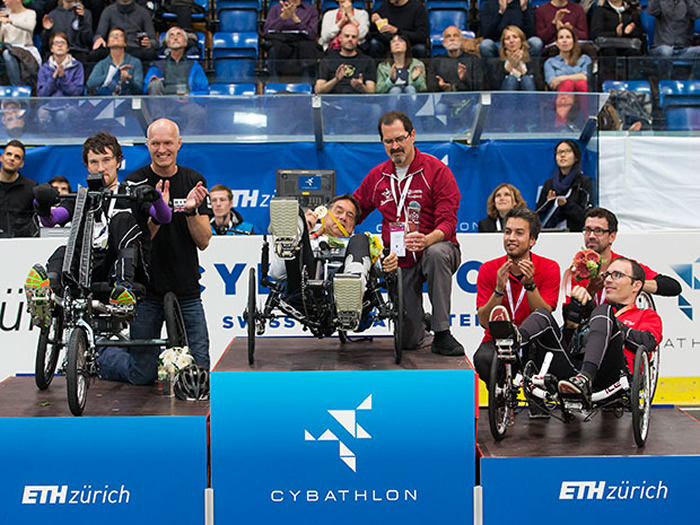 Human body and technology work in tandem at Cybathlon 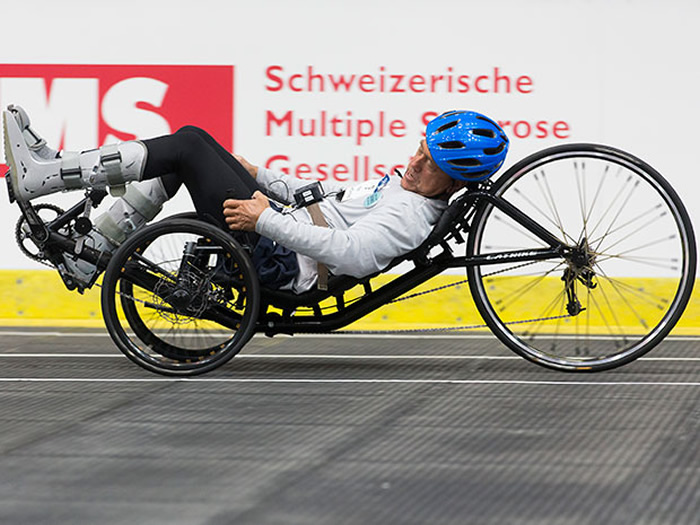 Mark Muhn is used to watching from his wheelchair as his kids win trophies for their achievements on the sports field. He’s been in that wheelchair since 2008, when a skiing accident crushed his spine and left him paralyzed from the chest down.

Last Saturday, though, Mark was the one on the podium with a gold medal draped around his neck. “I’ve watched my kids win, but this time they got to watch me,” he says.

Muhn won gold at the Cybathlon, the world’s first cyborg Olympics, which took place this weekend in a sold-out stadium in Zurich, Switzerland. He competed in a bike race that required the human body and cutting-edge technology to work in tandem. During the race, implanted electrodes sent pulses of electricity into the nerves in his legs to control his dormant leg muscles. With the right pattern of electrical pulses, his paralyzed legs pushed on the bike pedals.

“You could really see the technology and the pilot working together,” says neural engineer Ronald Triolo, who developed Muhn’s gear as a researcher at the Advanced Platform Technology Center at the VA Medical Center in Cleveland, Ohio. “The total was greater than the sum of its parts.”

Muhn had been training for the Cybathlon’s functional electrical stimulation (FES) bike race for months. And he’s had the electrodes in his legs for much longer—ever since he joined Triolo’s research study in 2012. The study has mainly focused on using electrical stimulation to get paraplegics to stand up and take steps. Biking got added to the agenda last year when Triolo heard about the Cybathlon and decided to take part.

On Saturday, Muhn beat out 10 other FES cyclists from around the world who competed in heats. Muhn took the gold with a time of 2:58 for the 750-meter course, more than a minute ahead of his nearest competitor. While Team Cleveland is full of praise for all the participants in the race, Triolo doesn’t mind talking about Muhn’s excellent showing. “He lapped the competition,” says Triolo. “It wasn’t a photo finish—he dominated.”

Triolo notes that Muhn was the only cyclist with implanted electrodes that sent signals through the nerves; the other competitors had surface electrodes on their skin that sent electrical signals to the leg muscles. “I think we were successful in showing the world that implant technology is nothing to be afraid of,” Triolo says, “and that the advantages far outstrip the surgical risks.”

IEEE Spectrum covered Triolo’s nerve-stimulating technology earlier this year in the feature article, “Get Ready for the World’s First Cyborg Olympics.” Since that article was published, Triolo’s team improved its FES bike system by putting location sensors in the bike pedals. That addition allowed them to fine-tune the pattern of electrical stimulation, so the system sent the most power to Muhn’s legs when the pedals were in the right position for a push.

While its technology was impressive, Team Cleveland couldn’t have won without old-fashioned human grit. Whether a muscle is receiving commands from an electric pulse generator or the brain, it still gets fatigued. So Muhn trained hard with an FES bike over the past six months, riding almost every day, to bulk up his muscles.

Muhn says his personal best time is about 2:30. He lost a little time in Zurich because the track was spongy, he says, and because he had to slow down at the end to avoid plowing into a cameraman riding a Segway.

Triolo says the competition was motivating, but the trophy and gold medal are less important than the advances his team made in its technology. “I’ve always said, if winning the race is the end goal, then I’m not interested. I want to take this experience and build on it,” he says. “I’m really concerned with what happens next.”