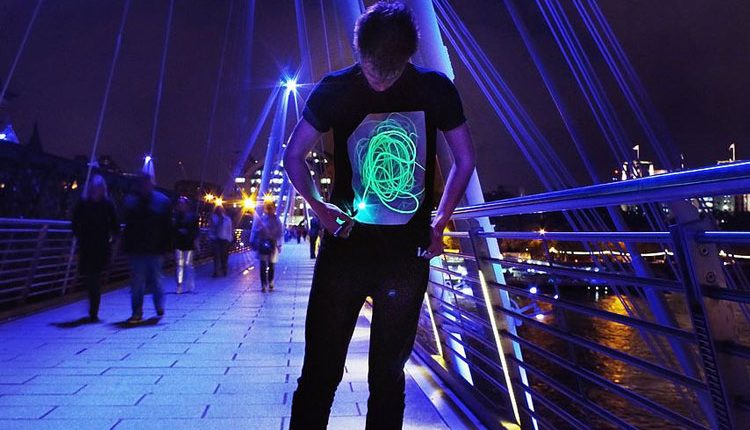 I can see the light at the end of the wardrobe

Some people love to doodle and sometimes a pen and paper just isn’t enough. If you were in a dark room with the founder of the company Illuminated Apparel and its laser glowing t-shirts, you would not be left disappointed.

Illuminated Apparel is a London-based company founded back in 2014 by 24-year old Manley, that produces interactive glow t-shirts in which the wearer can draw anything they want using a variety of items, a laser UV key ring (which is provided with the t-shirt), a mobile phone light, a torch or laser. The product is said to have a life span of 20-30 years, and the glow lasts around five minutes allowing you to constantly create new designs.

Manley, who went on to appear on the UK’s Dragons Den earlier this year, had tried a few attempts with this one idea, but gave it one last chance, and it had appeared he had ‘got it right’ with this time the business taking off.

The main selling point was that the ink he had developed for Illuminated Apparel was ten times brighter than standard inks available. Currently, the t-shirts come in two colors, ‘Super Green Glow’ (the brightest) and ‘Super Peach Glow’, but there is always room to add more colors.

Using a bespoke glow ink it has been designed so that a high intensity glow is produced to remain durable when printed on the t-shirt.

Manufacturing their own equipment, Manley and his group wanted to understand the process from scratch so they could see what worked well and what didn’t. It was quite difficult screen printing the ink onto samples and various obstacles and challenges were faced, which have been overcome.

After manufacturing samples and tests the company took the idea to a large printing factory who manufactured production ready samples. Approval for full scale manufacture was granted after just two weeks.

Due to not having any background in design or t-shirt manufacturing it was a bit of a rollercoaster, but using scrap wood and a converted rotisserie oven for chicken the screen printing equipment was made. 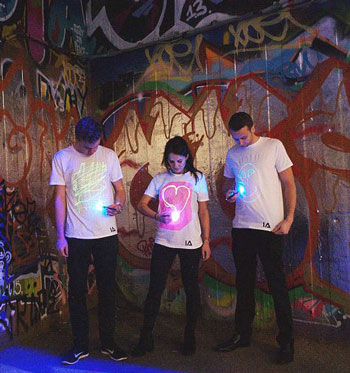 Manley said he has always had an interest in the fashion tech area, and came up with the idea when he was thinking of something he would like to wear that was exciting, interactive and fun, “there the idea of a super cool glowing t-shirt was born.”

With hours of research and watching YouTube videos Manley thought: “There must be a way to charge a luminous ink using direct light.” Yet anything that was commercially available would not create a glow bright enough and was too expensive, so this is when he attempted to create his own ink.

Finally when he got the ink he was happy with, the ink was combined with clothing – to create a different interactive experience.

The t-shirt comes, in normal fabric- 100% cotton, with a panel in the center for you to start your artwork. The keyring laser provided with the t-shirt comes on handy necklace so you can’t lose it, whilst the laser torch pen (a worthwhile added extra) is definitely more effective to write messages and for more detail.

As you wear the t-shirt it could not be more comfy, and so easy to write on your canvas – obviously the glow is more effective in the dark but does still work in the light too. As well as drawing free hand shapes and designs, you can draw over shapes and stencils to create a shadow effect – perfect for certain occasions.

Illuminated Apparel also offers a ‘Logo Embedding’ service, where you can embed your company’ logo or brand into the ink design, for new exciting marketing opportunities and brand exposure.

To see more about the product and get your own t-shirt, visit the website here.