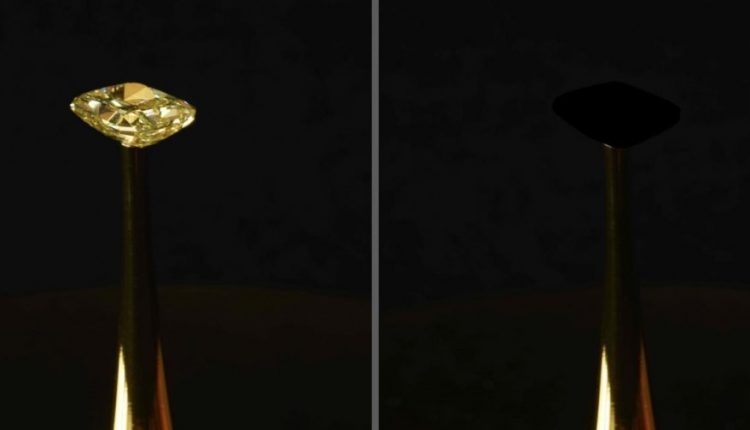 Into the Void: Engineers Create the “Blackest Black”

Engineers at the Massachusetts Institute of Technology say they have created the “blackest black” possible. It’s already been used in an art exhibit at the New York Stock Engine, titled “The Redemption of Vanity,” and shows promise for practical applications. It is reported to be 10 times blacker than any known material.

The artwork is a collaboration between Brian Wardle, professor of aeronautics and astronautics at MIT, and MIT artist-in-residence Diemut Strebe. The team coated a 16.78-carat natural yellow diamond (estimated value: $2 million) with the ultrablack material. The once-brilliant gem shows up as a black void. The result seems chilling, as the diamond appears to not even exist as an object but as a black hole in space.

The material is made from vertically aligned carbon nanotubes, or CNTs—microscopic filaments of carbon, like a fuzzy forest of tiny trees, that the team grew on a surface of chlorine-etched aluminum foil. The foil captures more than 99.995 percent of any incoming light.

A paper depicting the process, authored by Wardle and former MIT postdoc Kehang Cui, who now works as a professor at Shanghai Jiao Tong University, was published in the journal ACS-Applied Materials and Interfaces.

When Wardle and Cui discovered the ultrablack material their research was actually focused on other goals. They were looking to boost the electrical and thermal properties of electrically conducting materials by growing carbon nanotubes on them.

When the researchers tried to grow CNTs on aluminum, they discovered a layer of oxide coats the aluminum as soon as it is exposed to air. The oxide blocks the conduction of electricity and heat.

Trying to eliminate this coating, Cui soaked the aluminum foil in saltwater. It worked to not only dissolve the oxide layer but eat away at the surface of the aluminum. Cui then transferred the foil to an oxygen-free environment to prevent reoxidation and then placed it in an oven to grow nanotubes via chemical vapor deposition.

The resulting carbon tubes improved the aluminum’s conductivity, as expected – and also turned it the darkest shade of black anyone has ever seen.

The researchers have applied for a patent on the process but are also making it freely available for artists to use for noncommercial art projects.

Morphing Electronic Platform Could Be the Future of Soft Robotics