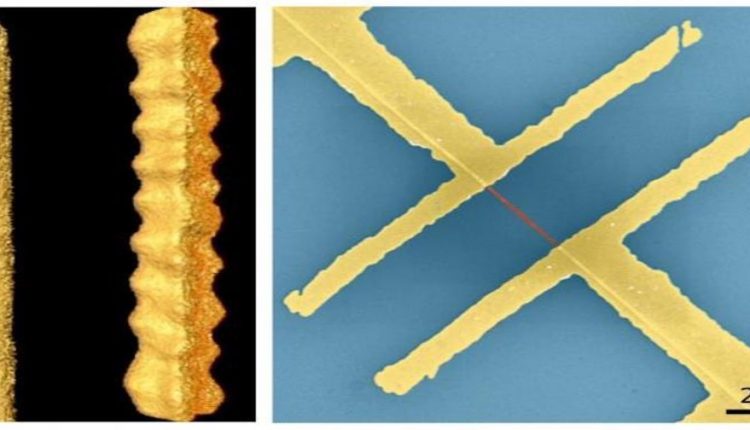 Semiconductors can behave like both metals and superconductors, researchers at the University of Rostock and Swansea University have discovered, due to the crystal structure at their surface. This could mean advances in the creation of more energy-efficient electronic devices.

Semiconductors are the active parts of transistors, integrated circuits, sensors, and LEDs. These materials, mostly based on silicon, are at the heart of today’s electronics industry.

We use their products almost continuously, in modern TV sets, in computers, as illumination elements, and of course as mobile phones.

Metals, on the other hand, wire the active electronic components and are the framework for the devices.

The research team, led by Professor Christian Klinke of Swansea University’s chemistry department and the University of Rostock in Germany, analyzed the crystals at the surface of semiconductor materials.

Applying a method called colloidal synthesis to lead sulphide nanowires, the team showed that the lead and sulphur atoms making up the crystals could be arranged in different ways. Crucially, they saw that this affected the material’s properties.

In most configurations the two types of atoms are mixed and the whole structure shows semiconducting behaviour as expected.

However, the team found that one particular “cut” through the crystal, with the so-called {111} facets on the surface, which contains only lead atoms, shows metallic character.

This means that the nanowires carry much higher currents, their transistor behaviour is suppressed, they do not respond to illumination, as semiconductors would, and they show inverse temperature dependency, typical for metals.

Dr. Mehdi Ramin, one of the researchers from the Swansea/Rostock team, said:

“After we discovered that we can synthesize lead sulphide nanowires with different facets, which makes them look like straight or zigzag wires, we thought that this must have interesting consequences for their electronic properties.

But these two behaviors were quite a surprise to us. Thus, we started to investigate the consequences of the shape in more detail.”

The team then made a second discovery: at low temperatures the skin of the nanostructures even behaves like a superconductor. This means that the electrons are transported through the structures with significantly lower resistance.

Professor Christian Klinke of Swansea University and Rostock University, who led the research, said: “This behaviour is astonishing and certainly needs to be further studied in much more detail. But it already gives new exciting insights into how the same material can possess different fundamental physical properties depending on its structure and what might be possible in the future.”

Lossless energy transport, which means that no energy is wasted is one potential application and with further optimization and transfer of the principle to other materials, significant advances can be made that might lead to new efficient electronic devices.

“The results presented in the article are merely a first step in what will surely be a long and fruitful journey towards new thrilling chemistry and physics of materials.”