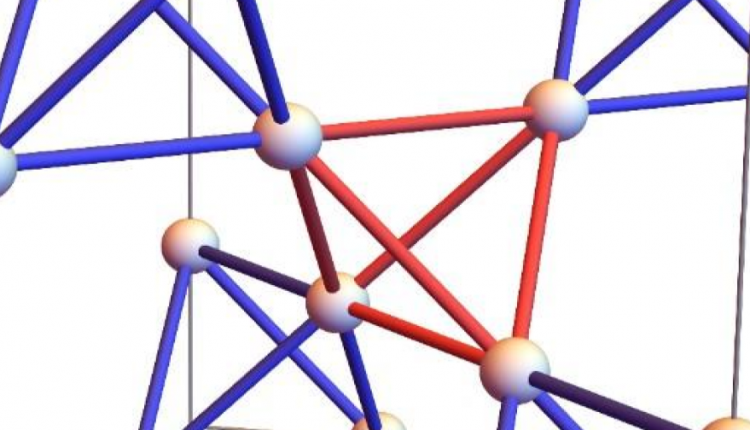 On the cusp of the second wave of quantum computing, electronics engineers, physicists and chemists are collaborating to meet the challenges of disruptive technologies that will affect many aspects of our lives. Over the last few decades, machine learning has already revolutionized many sectors of society, with machines learning to drive cars, identify tumors and play chess—often surpassing their human counterparts.

Now, a team of scientists based at the Okinawa Institute of Science and Technology Graduate University (OIST), the University of Munich and the CNRS at the University of Bordeaux have shown that machines can also beat theoretical physicists at their own game, solving complex problems just as accurately as scientists, but considerably faster.

In the study recently published in Physical Review B, a machine learned to identify unusual magnetic phases in a model of pyrochlore—a naturally occurring mineral with a tetrahedral lattice structure. Remarkably, when using the machine, solving the problem took only a few weeks, whereas previously the OIST scientists needed six years.

“This feels like a really significant step,” said Professor Nic Shannon, who leads the Theory of Quantum Matter (TQM) Unit at OIST. “Computers are now able to carry out science in a very meaningful way and tackle problems that have long frustrated scientists.”

The Source of Frustration

In all magnets, every atom is associated with a tiny magnetic moment—also known as “spin.” In conventional magnets, like the ones that stick to fridges, all the spins are ordered so that they point in the same direction, resulting in a strong magnetic field. This order is like the way atoms order in a solid material.

But just as matter can exist in different phases—solid, liquid and gas—so too can magnetic substances. The TQM unit is interested in more unusual magnetic phases called “spin liquids,” which could have uses in quantum computation. In spin liquids, there are competing, or “frustrated” interactions between the spins, so instead of ordering, the spins continuously fluctuate in direction—similar to the disorder seen in liquid phases of matter.

Previously, the TQM unit set out to establish which different types of spin liquid could exist in frustrated pyrochlore magnets. They constructed a phase diagram, which showed how different phases could occur when the spins interacted in different ways as the temperature changed, with their findings published in Physical Review X in 2017.

But piecing together the phase diagram and identifying the rules governing the interactions between spins in each phase was an arduous process.

“These magnets are quite literally frustrating,” said Shannon. “Even the simplest model on a pyrochlore lattice took our team years to solve.”

With increasing advances in machine learning, the TQM unit was curious as to whether machines could solve such a complex problem.

“To be honest, I was fairly sure that the machine would fail,” said Shannon. “This is the first time I’ve been shocked by a result—I’ve been surprised, I’ve been happy, but never shocked.”

The OIST scientists teamed up with machine learning experts from the University of Munich, led by Professor Lode Pollet, who had developed a “tensorial kernel,” a way of representing spin configurations in a computer. The scientists used the tensorial kernel to equip a “support vector machine,” which is able to categorize complex data into different groups.

“The advantage of this type of machine is that unlike other support vector machines, it doesn’t require any prior training and it isn’t a black box—the results can be interpreted. The data are not only classified into groups; you can also interrogate the machine to see how it made its final decision and learn about the distinct properties of each group,” said Dr. Ludovic Jaubert, a CNRS researcher at the University of Bordeaux.

The Munich scientists fed the machine a quarter of a million spin configurations generated by the OIST supercomputer simulations of the pyrochlore model. Without any information about which phases were present, the machine successfully managed to reproduce an identical version of the phase diagram.

Importantly, when the scientists deciphered the “decision function” which the machine had constructed to classify different types of spin liquid, they found that the computer had also independently figured out the exact mathematical equations that exemplified each phase—with the whole process taking a matter of weeks.

“Most of this time was human time, so further speed ups are still possible,” said Pollet. “Based on what we now know, the machine could solve the problem in a day.”

With huge implications for theoretical physics, Shannon said the next step is to give the machine a more difficult problem humans haven’t yet managed to solve, and see whether it can do it better.