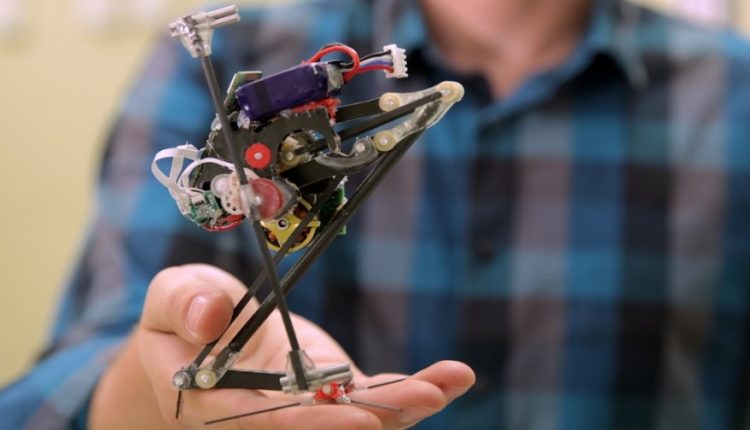 In a fun example of life imitating art, researchers at the University of California, Berkeley – about an hour away from George Lucas’ famed Skywalker Ranch – have developed an agile robot that resembles a small Star Wars Imperial Walker. Measuring less than a foot high, the robot is designed to aid in scouting and search-and-rescue operations.

In 2016, the research team demonstrated how Salto could take a leap and then immediately spring higher by ricocheting off a wall. Jumping more than three times its height, it was the world’s most vertically agile robot. Salto stands for saltatorial (leaping like a grasshopper) locomotion on terrain obstacles.

Today, the robot has a sophisticated control system, allowing it to master increasingly complex tasks, like bouncing in place, navigating an obstacle course, or following a moving target, all controlled with a radio controller.

UC Berkeley robotics graduate student Justin Yim, who is working with Ronald Fearing, an electrical engineering and computer sciences professor at UC Berkeley, has also equipped Salto with new technology that allows it to feel its own body, telling it what angle it is pointing and the bend of its leg. Without these abilities, Salto had been confined to a room in one of Berkeley’s engineering buildings, where motion capture cameras tracked its exact angle and position and transmitted that data back to a computer, which rapidly crunched the numbers to tell Salto how to angle itself for its next leap.

Now, the robot can make these calculations for itself, allowing Yim to take the robot outside and use a joystick and radio controller to tell it where to go.

Despite its resemblance to the Imperial walker, Salto’s single, powerful leg is actually modeled after those of the galago, or Senegalese bush baby. The small, tree-dwelling primate’s muscles and tendons store energy in a way that gives the spry creature the ability to string together multiple jumps in a matter of seconds. By linking a series of quick jumps, Salto also can navigate complex terrain — like a pile of debris — that might be impossible to cross without jumping or flying.

With its new capabilities, the researchers hope Salto will propel the development of small, nimble robots that could leap through rubble to aid in search-and-rescue and other military missions.