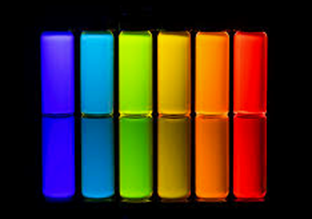 Estimates are that by 2025, we’ll create 175 zettabytes (175trillion gigabytes) of new data. What about the security of sensitive data at a high volume? And how will we address problems from privacy and security to climate change and leveraging the data?

An alternative is emerging in quantum communication and computation technologies that requires the widespread development of powerful new quantum optical circuits­ capable of securely processing massive amounts of information. Researchers in USC’s Mork Family Department of Chemical Engineering and Materials Science have made a breakthrough to enable this technology.

A quantum optical circuit uses a light source to generate individual photons, on-demand, one-at-a-time, acting as information-carrying bits (quantum bits or qubits). They are nano-sized semiconductor quantum dots. The optical circuit requires that the single photon sources be arranged on a semiconductor chip in a regular pattern. Researchers at USC demonstrated that single photons can be emitted in a uniform way from quantum dots arranged in a precise pattern.

The breakthrough paves the way to the next steps required to move from lab to chip-scale fabrication of quantum photonic circuits, with potential applications in quantum communication, imaging, sensing, and quantum simulations and computation.

To create the precise layout of quantum dots for the circuits, the team used a method called SESRE (substrate-encoded size-reducing epitaxy). The team fabricated regular arrays of nanometer-sized mesas with a defined edge orientation, shape (sidewalls), and depth on a flat semiconductor substrate, composed of gallium arsenide (GaAs). Quantum dots are then created on top of the mesas by adding appropriate atoms.

Researchers claim that their work sets a new world-record of ordered and scalable quantum dots in terms of the simultaneous purity of single-photon emission greater than 99.5%, and in terms of the uniformity of the wavelength of the emitted photons, which can be as narrow as 1.8nm, which is a factor of 20 to 40 better than typical quantum dots. For the first time, researchers can create scalable quantum photonic chips using well-established semiconductor processing techniques.