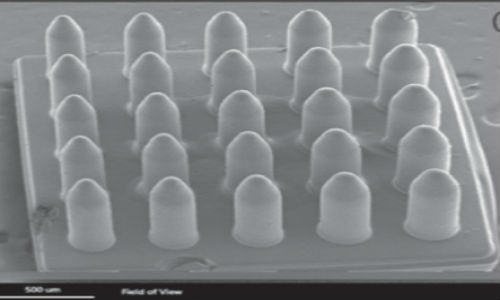 Researchers have been working on new method of delivering drugs into the human body. What they’ve come up with is a new 3D “micro-printed” array of needles that would be a pain-free alternative to drug delivery.

This new method, a collaborative creation by the University of Akron and the University of Texas, would allow drugs to diffuse within as the biomaterial device degrades in the body, offering upgraded treatments for many diseases, including melanoma cancers.

The array they created using microstereolithography was loaded with chemotherapy drugs for transdermal delivery. The arrays consisted of 25 poly(propylene fumarate) microneedles, each needle having a tip and base diameter of 20 µm and 200 µm, respectively, and a height of 1 mm.

It wasn’t easy creating such a complex array in this manner, though.

“3D printing this array was difficult, as the printable biomaterial contains some non-printable solvents and drugs,” said Jae-Won Choi, an author on the paper published today in the  journal Biofabrication.

Dacarbazine, commonly used to treat skin cancer, was blended into the solution prior to crosslinking (a final part of the 3D printing process).

The needles were tested and proved to be capable of withstanding the stresses and strains they would likely encounter  once inserted into the body.

Drug-release profiles remain a challenge for the future, Choi added.

“We’d like to have a faster drug release, but this will require more material research. Once we improve this process we can look at developing more controlled drug release,” said Choi.

The team’s hope is that this will be a widely used method of drug delivery in five to ten years.

For more information visit the Institute of Physics.

This mini 3Dsimo is a 4-in-1 tool that 3D prints, solders, burns, and cuts