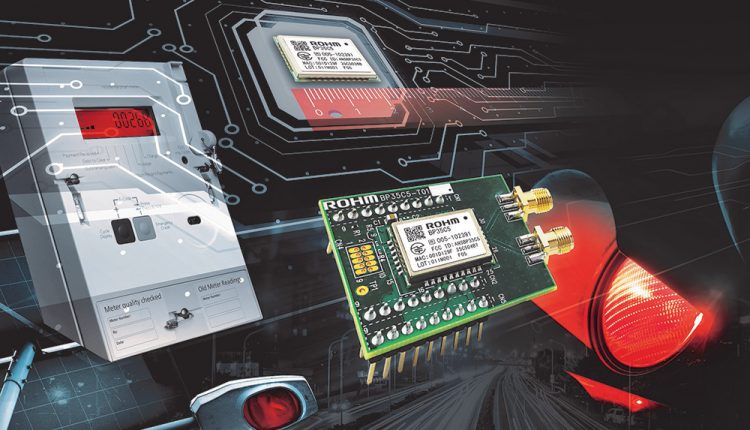 In recent years, wireless technologies such as LPWA have been increasingly adopted in social infrastructure applications to configure large-scale area outdoor networks. However, conventional LPWA protocols (e.g., Sigfox, LoRaWAN, NB-IoT) are vulnerable to changes in the surrounding environment (i.e., new building creation), making them susceptible to problems that include decreased communication speeds, as well as communication failures.

In response, ROHM’s new Wi-SUN FAN solution utilizes an in-house developed ultra-small (15.0mm × 19.0mm) BP35C5 Wi-SUN FAN compatible wireless communication module. This solution is capable of connecting with up to 1,000 devices (e.g., traffic signals and streetlights), enabling the configuration of a remote wireless management system covering an entire city. The BP35C5 also includes the necessary security functions for carrying out secure communication, without the need for complicated control. Certifications acquired under the FCC (Federal Communications Commission) and ARIB (Association of Radio Industries and Business) allow for immediate use both in the U.S. and Japan. Other countries and regions will be supported in the near future.

The BP35C5 solution evaluation board (BP35C5-T01) is available for purchase now through online distributors Digi-Key and Mouser.

What is Wi-SUN FAN?

Wi-SUN FAN (Wireless Smart Utility Network for Field Area Network profile), the latest protocol under the Wi-SUN international communication standard with over 95 million units shipped worldwide, is expected to see broad adoption as a network technology for achieving an IoT society by providing superior reliability in a variety of systems used to construct smart cities and smart grids, including infrastructure and advanced transportation systems as well as electricity, gas, and water meters.

Women in Electronics Announces the Even Better Together Summit: Progressing Cultural Innovation