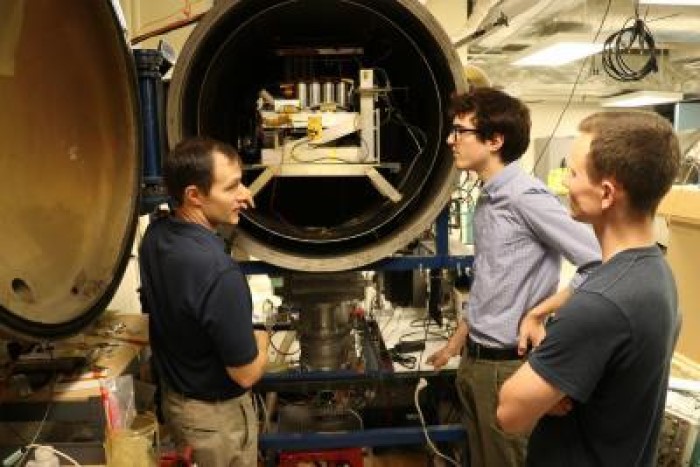 Salt-based Propellant Works in Both Combustion and Fuel-Efficient Modes

No one ever said space travel would be easy. Dual-mode rockets have traditionally used two different fuels during ascent, a high-density impulse fuel for the first half of the trajectory, and a high specific impulse fuel during the second half. But for dual-mode rocket engines to be truly successful, a propellant must function in both combustion and electric propulsion systems. Now researchers from the University of Illinois at Urbana-Champaign used a salt-based propellant that had already been proven successful in combustion engines and demonstrated its compatibility with electrospray thrusters.

“We need a propellant that will work in both modes,” said Joshua Rovey, associate professor in the Department of Aerospace Engineering in The Grainger College of Engineering at the U of I. “So, we created a propellant that is a mixture of two commercially available salts—hydroxylammonium nitrate and emim ethylsulfate. We have published other research papers showing that salt propellants work in the high-acceleration combustion mode. Now we know that this unique combination of salts will also work in the electric fuel-efficient mode.”

With electrospray or colloid propulsion, the thrusters electrostatically accelerate ions and droplets from these liquids. It’s a technique that started in the biology/chemistry community, then the propulsion community began looking at it about 20 years ago.

In this study, in addition to showing that the propellant could be sprayed, Rovey said they were interested in learning what kinds of chemical species come out in the plume. “Because no one has ever tried this type of propellant before, we expected to see species that no one else has ever seen before and, in fact, we did.”

Rovey said they also saw a new swapping of the constituents that make up the two different salts.

“We saw some of the hydroxylammonium nitrate salt bonding with the emim ethyl sulfate salt. The two are mixed together inside the propellant and are constantly bonding with each other and then detaching. There’s a chaotic nature to the system and it was unclear how those interactions within the liquid itself would propagate and show up in the spray. There are no chemical reactions happening. It’s just that we start with A and B separately and when they come out in the spray, A and B are bonded together,” he said.

Rovey said these findings shed a lot of light on what’s happening in these mixtures of salts that are possible propellants for electrosprays. But it also opens doors to a lot of other questions that will lead to fundamental studies that try to understand the interactions within these propellants and how that translates into what comes out in the spray itself.