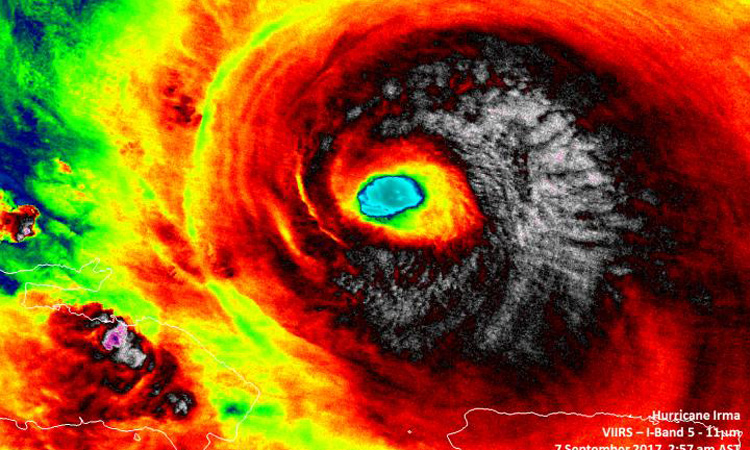 Irma is on her way to the US and the conditions are bad...

NASA’s  Aqua satellite and NASA-NOAA’s Suomi NPP satellite have collected satellite imagery with different data, showing the different shades on the life impacting Category 5 Hurricane Irma as it headed for the Turks and Caicos Islands.

The Moderate Resolution Imaging Spectroradiometer or MODIS instrument aboard NASA’s Aqua satellite was able to capture a visible-light image of Hurricane Irma, on Wednesday September 6th as it headed over the Leeward Islands and Puerto Rico.

The image revealed a clear eye with powerful bands of thunderstorms circling the eye.

Then on September 7th, when Aqua passed over Irma again, another instrument aboard Aqua gathered temperature data on the storm’s clouds, which tell forecasters where the strongest parts of the hurricane is located.

The colder the cloud tops, the higher the storm, and the stronger it is.

NASA-NOAA’s Suomi NPP satellite confirmed that data. At that time, the southwestern quadrant of the storm was over Puerto Rico.

On September 7th, the VIIRS instrument on board the NOAA/NASA Suomi NPP satellite captured data on Irma as the storm passed to the northwest of the island of Puerto Rico.

In a night-time image created by Suomi NPP’s Day Night Band, the waning gibbous moon highlighted the convection around Irma’s eye and tropospheric gravity waves were present around the well-defined eyewall.

Infrared imagery from Suomi NPP revealed cloud top temperatures as cold as 190 kelvin (-83.1°C/-117.7°F) from Irma’s northern quadrant, stretching through the eastern side to the south of the eye.

Watches and Warnings in Effect

September 7th saw the hurricane and storm surge watches come into effect for portions of south Florida and the Florida Keys.

There are currently many warnings and watches in effect. A Storm Surge Watch is in effect from Jupiter Inlet southward around the Florida peninsula to Bonita Beach, Florida, and for the Florida Keys.

A Hurricane Watch is in effect from Jupiter Inlet southward around the Florida peninsula to Bonita Beach, Florida, the Florida Keys, Lake Okeechobee, Florida Bay, and for Cuba from Matanzas province eastward to Guantanamo province.

A Tropical Storm Warning is in effect for the Dominican Republic from south of Cabo Engano westward to the southern border with Haiti; Haiti from south of Le Mole St. Nicholas to Port-Au-Prince; Cuba provinces of Guantanamo, Holguin, Las Tunas, Camaguey, Ciego de Avila, Sancti Spiritus and Villa Clara.

The National Hurricane Center (NHC) said that the distinct eye of Hurricane Irma was located near 20.4° north latitude and 69.7° west longitude. Irma was moving toward the west-northwest near 16mph (26kph), and this general motion is expected to continue with some decrease in forward speed for the next couple of days.

On the forecast track, the eye of Irma should continue to move just north of the coast of Hispaniola today, be near the Turks and Caicos and southeastern Bahamas by this evening, and then be near the central Bahamas by Friday, September 8th.

Maximum sustained winds are near 175mph (280kph) with higher gusts.

Irma is a category 5 hurricane on the Saffir-Simpson Hurricane Wind Scale.

Some fluctuations in intensity are likely during the next day or two, but Irma is forecast to remain a powerful category 4 or 5 hurricane during the next couple of days.

The minimum central pressure reported by an Air Force plane was 921 millibars.

NHC forecaster Lixion Avila noted: “There are no obvious reasons why Irma will not remain a powerful hurricane for the next three days while approaching Florida. Thereafter, an increase in the wind shear could lead to gradual weakening, but Irma is expected to remain a major hurricane until landfall occurs.”

The 14 Ways You Can Keep Your Watch Ticking…

Now Your iPhone Case Can Charge Your AirPods