Semiconductor R&D To Nudge Higher Through 2024

The semiconductor business is defined by rapid technological changes and the need to maintain high levels of investment in research and development for new materials, innovative manufacturing processes for increasingly complex chip designs, and advanced IC packaging technologies.

While consolidation in the semiconductor industry contributed to lower growth rates in R&D spending in the past five years, the long-term trend has been for a slowdown in annual increases of research and development expenditures since the 1980s, according to data presented in the new edition of IC Insights’ McClean Report—’A Complete Analysis and Forecast of the Integrated Circuit Industry’, which was released in January 2020.

However, technical challenges including three-dimensional die-stacking technologies, the move to extreme ultraviolet lithography in advanced processes, and growing complexities in products are expected to lift R&D budgets by slightly higher growth rates in the 2019-2024 period (Figure 1). 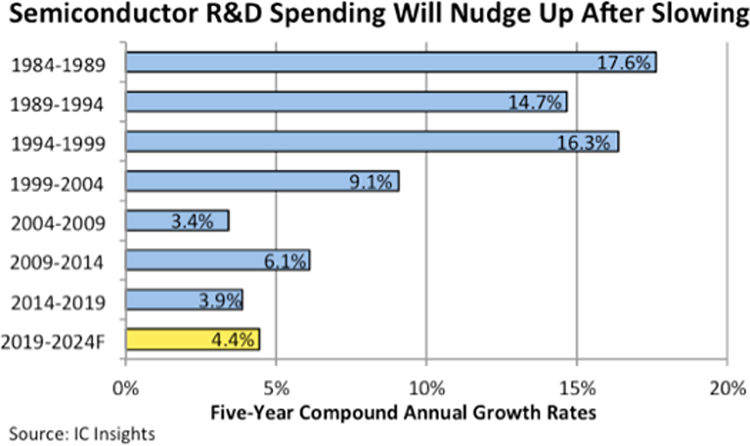 R&D spending trends discussed here cover expenditures by integrated device manufacturers (IDMs), fabless chip suppliers, and pure-play wafer foundries and do not include other companies and organizations involved in semiconductor-related technologies, such as production equipment and materials suppliers, packaging and test service providers, universities, government-funded labs, and industry cooperatives, such as IMEC in Belgium, the CAE-Leti Institute in France, the Industrial Technology Research Institute (ITRI) in Taiwan, and the U.S.-based Sematech consortium, which was merged into the State University of New York (SUNY) Polytechnic Institute in 2015.

Since the 1990s, the semiconductor industry has led all other major industrial segments in R&D intensity, with annual spending on research and development averaging about 15% of total sales, according to data compiled by IC Insights. Over the last three years, however, the semiconductor industry’s R&D-to-sales percentage slid to 13.5% in 2017 and 13.0% in 2018 primarily because of extremely high revenue growth in memory ICs.

The industry’s R&D/sales ratio rebounded to 14.6% in 2019 when memory IC revenues fell 33% and the entire semiconductor market dropped 12%. The pharmaceuticals and biotechnology sector moved into the top position in the 2019 ranking with an R&D/sales ratio of 15.4%, based on a global survey in the European Union Industrial R&D Investment Scorecard report (Figure 2).

Semiconductor Memory Market Worth Over $250bn by 2026

Semiconductor Memory Market Worth Over $250bn by 2026