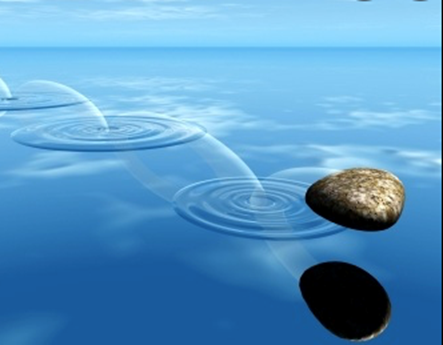 Skipping Stones Into a Quantum Whirlpool

Researchers observed vortices that form in superfluid helium by blasting silicon nanoparticles at them using laser ablation. Osaka Metropolitan University scientists performed a massive simulation of quantum vortex dynamics that confirmed that quantum vortices caused the observed nanoparticle swirls and loops. The work creates new possibilities in optical research for other quantum properties of superfluid helium, including the optical manipulation of quantized vortices due to the strong interaction between light and silicon nanoparticles.

Weird quantum behavior usually is only found on a microscopic scale with quantum mechanics. However, when certain materials, like helium 4, are cooled to very low temperatures, the “waviness” of the particles has effects apparent even at macroscopic scales.

The research team used silicon nanoparticles to help visualize the features of superfluid helium, similar to skipping stones across a river, to help visualize water flow. With superfluid helium, any rotational motion can only occur in the form of quantized vortices. The scientists used the nanoparticle “stones” to study the process of vortex reconnection, in which lines of vortices coalesce and exchange their parts. Because the light scatters off the nanoparticles, the vortex lines they are attracted to are clearly visible.