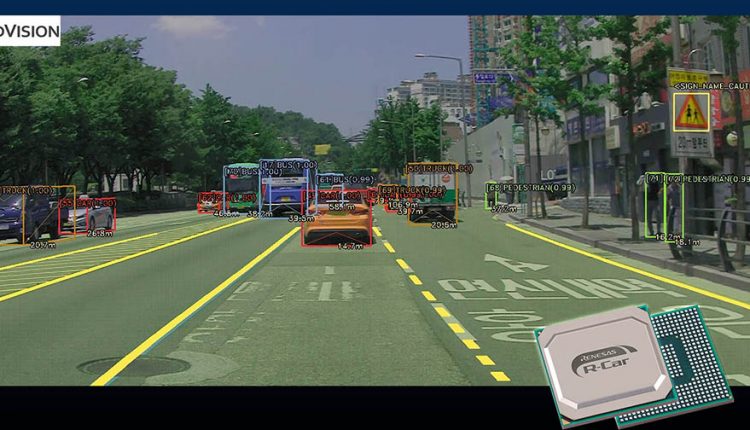 To avoid hazards in urban areas, next-generation ADAS implementations require high-precision object recognition capable of detecting so-called vulnerable road users (VRUs) such as pedestrians and cyclists. At the same time, for mass-market mid-tier to entry-level vehicles, these systems must consume very low power. The new solution, a joint development between Renesas and StradVision, of a deep learning-based object recognition solution for smart cameras used in next-generation advanced driver assistance system (ADAS) applications and cameras for ADAS Level 2 and above, is designed to accelerate the widespread adoption of ADAS, while achieving both needs.

“A leader in vision processing technology, StradVision has abundant experience developing ADAS implementations using Renesas’ R-Car SoCs, and with this collaboration, we are enabling production-ready solutions that enable safe and accurate mobility in the future,” said Naoki Yoshida, Vice President of Renesas’ Automotive Technical Customer Engagement Business Division. “This new joint deep learning-based solution optimized for R-Car SoCs will contribute to the widespread adoption of next-generation ADAS implementations and support the escalating vision sensor requirements expected to arrive in the next few years.”

Junhwan Kim, CEO of StradVision, added: “StradVision is excited to combine forces with Renesas to help developers efficiently advance their efforts to make the next big leap in ADAS. This joint effort will not only translate into quick and effective evaluations but also deliver greatly improved ADAS performance. With the massive growth expected in the front camera market in the coming years, this collaboration puts both StradVision and Renesas in an excellent position to provide the best possible technology.”

StradVision’s SVNet deep learning software is a powerful AI perception solution for the mass production of ADAS systems. It is highly regarded for its recognition precision in low-light environments and its ability to deal with occlusion when objects are partially hidden by other objects.

The basic software package for the R-Car V3H performs simultaneous vehicles, person and lane recognition, processing the image data at a rate of 25 frames per second, enabling swift evaluation and POC development.

Using these capabilities as a basis, if developers wish to customize the software with the addition of signs, markings and other objects as recognition targets, StradVision provides support for deep learning-based object recognition covering all the steps from training through the embedding of software for mass-produced vehicles.

In addition, the on-chip image signal processor (ISP) is designed to convert sensor signals for image rendering and recognition processing. This makes it possible to configure a system using inexpensive cameras without built-in ISPs, reducing the overall bill-of-materials (BOM) cost.

Renesas R-Car SoCs featuring the new joint deep learning solution, including software and development support from StradVision, is scheduled to be available to developers by early 2020.