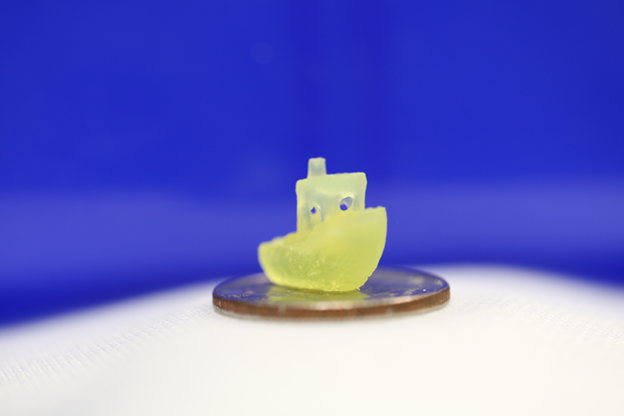 With most 3D printers, objects are built up layer by layer. But what if they didn’t have to be?

Dan Congreve, an assistant professor of electrical engineering at Stanford and former Rowland Fellow at the Rowland Institute at Harvard University, developed a new way to print 3D objects within a stationary volume of resin. Thick resin supports the object—think ‘block of Jell-O’—so the printer can add to it from any angle, eliminating support structure requirements for complex designs inherent in standard printing methods. The new 3D printing system recently revealed in Nature, could make it easier to print increasingly intricate designs while saving time and material.

Researchers focused a laser through a lens and shone it into a gelatinous resin that hardens when exposed to blue light. They used a red light and cleverly designed nanomaterials scattered throughout resin to create blue light at only the precise focal point of the laser and were able to create detailed, support-free prints.

They are working on ways to refine their 3D-printing technique to print multiple points simultaneously, which would speed up the process considerably, as well as printing at higher resolutions and smaller scales.