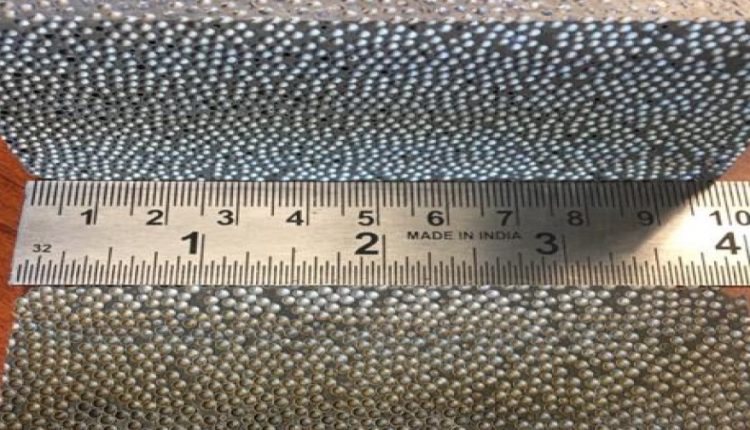 Shaped to make air move faster over the top of the wing and decrease air pressure to create the force to generate lift, the leading edges of aircraft wings have to meet a very demanding set of characteristics. New research shows that a combination of steel composite metal foam (CMF) and epoxy resin has more desirable characteristics for use as a leading-edge material than the aluminum currently in widespread use.

“We call our hybrid material ‘infused CMF,'” says Afsaneh Rabiei, corresponding author of a paper on the work and a professor of mechanical and aerospace engineering at NC State. “And while infused CMF is about the same weight as aluminum, it is tougher and has other characteristics that make it more appealing from a flight performance, safety and fuel efficiency standpoint.”

CMF is a foam that consists of hollow, metallic spheres—made of materials such as stainless steel or titanium—embedded in a metallic matrix made of steel, aluminum or metallic alloys. For this study, the researchers used steel-steel CMF, meaning that both the spheres and the matrix were made of steel. Previous work has found the metal foam is remarkably tough: it can withstand .50 caliber rounds, resist high temperatures, and block blast pressure from high explosive incendiary rounds.

The infused CMF is made by immersing the steel-steel CMF in a hydrophobic epoxy resin and using vacuum forces to pull the resin into both the hollow spheres and into much smaller pores found in the steel matrix itself. This results in about 88 percent of the CMF’s pores being filled with epoxy resin.

The researchers then tested both infused CMF and aerospace grade aluminum to see how they performed in three areas: contact angle, which determines how quickly water streams off of a material; insect adhesion, or how well bug parts stuck to the material; and particle wear, or how well the material stands up to erosion. All of these factors affect the performance of an aircraft wing’s leading edge.

Contact angle is a measure of how well water beads up on a surface. The lower a material’s contact angle, the more the water clings to the surface. This is relevant for aircraft wings because water buildup on a wing can affect aircraft performance. The researchers found that infused CMF had a contact angle 130% higher than aluminum – a significant improvement.

The researchers also conducted grit blast experiments to simulate the erosion caused by the wear and tear that occurs over time when aircraft wings are in use. The researchers found that, while grit blast did increase surface roughness for infused CMF, it still fared better than aluminum. For example, at its worst, infused CMF still had a contact angle 50 percent higher than that of aluminum.

In other words, the infused CMF retained its properties through erosion and wear, which indicates that it would give leading-edge wing components a longer lifetime – and reduce the costs associated with maintenance and replacement.

“Aluminum is currently the material of choice for making the leading edge of fixed-wing and rotary-wing aircraft wings,” Rabiei says. “Our results suggest that infused CMF may be a valuable replacement, offering better performance at the same weight.

“By the same token, the results suggest that we could use different materials for the matrix or spheres to create a combination that performs as well as conventional aluminum at a fraction of the weight. Either way, you’re improving performance and fuel efficiency.”