The Swiss Army Knife for engineers

It might not be able to take the stones out of horses’ hooves, but after a chat with Red Pitaya’s CEO Rok Mesar, you can certainly see why the Slovenia-based company’s STEMLab module has the moniker ‘the Swiss Army Knife for engineers’ – due to the portability, flexibility and affordability it provides design engineers.

Red Pitaya is a privately-owned company established in 2013 which spun off from Instrumentation Technologies. This followed a successful Kickstarter campaign which raised around €260,000, enabling the company to be established.

“We, along with many of our customers, refer to us as ‘the Swiss army knife for engineers,’” commented Mesar. “I came from a very large company that consisted of around 200 engineers working on very high end instrumentation for partial accelerators, building beam position monitors etc. As a result of this type of work we needed a lot of instrumentation – scopes, spectralisers and so on. And that instrumentation constituted quite a big investment.”

As a result Mesar and the rest of the Red Pitaya team, began to discuss the possibility of creating a solution that would better fit the needs of its engineers and the wider public as a whole. Mesar continued: “We asked ourselves whether we could replace many of the instruments in use with a credit card size device with a web-based GUI, which can be controlled with all the languages that are frequently used in industry.”

And so STEMlab was born. It is based on a dual core ARM Cortex A9 + Xilinx Zynq 7010 FPGA system-on-chip (SoC), which features a dual core processor and FPGA logic, enabling software and hardware programming. This is coupled with accurate high-end ADCs. Customisable at the FPGA and CPU levels, STEMlab can process real world signals. The credit card sized board also features front-end input and output connectors that have a curved design, making it as small as possible – eliminating the need for other adapter boards.

STEMlab offers a test and measurement environment that includes a board, an application marketplace and a source code library. It is designed as a low cost alternative to many expensive measurement and control instruments, and can function as an oscilloscope, logic analyser, signal generator and spectrum analyser. 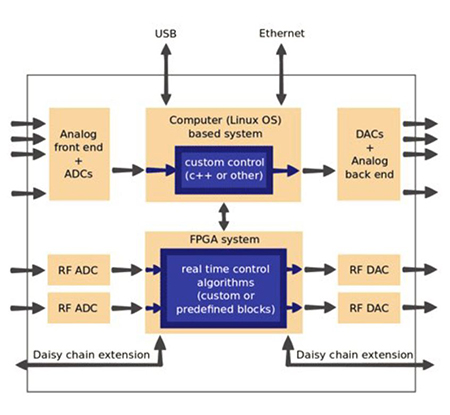 Mesar added: “With Red Pitaya we have three pillars to our business. Our high accuracy, high resolution hardware; an ecosystem featuring an application marketplace which we provide to our customers; and our open source repository where we provide sources to our customers. So when you buy from us you don’t just get hardware, you get plenty of applications and everything is open source.”

Mesar went onto explain that this approach is completely different to many other instrumentation providers, where the norm is to receive closed source hardware which you cannot modify.

The vision of the company is to build a large community for its customers, enabling interaction and allowing them to tell Red Pitaya what they need in terms of software and hardware, make modifications and customer-specific applications, offer support and share ideas.

Around 35,000 STEMlab boards have been sold so far. Key customer sectors include schools and universities – who are replacing some traditional test and measurement equipment like oscilloscopes with the portable STEMlab boards. Mesar continued: “Students can take it home, lecturers can connect remotely via a web browser and can help students with their projects. Around 30% of universities around the world are using Red Pitaya boards.

“However, it’s not only a test and measurement device. We have built courses for FPGA programming and for basics in electronics etc so students have a step-by-step guide to learn about electronics all the way up to engineer level. It’s similar to Raspberry Pi in terms of programmability but it also has a very strong RF front end.

“Another key customer is engineers who are embedding our solution into theirs. For example, where an engineer is controlling lasers and wants a data acquisition device which is open source, so it can be modified, and they want to do it quickly. It is also popular with engineers in the lab who use our device for fast prototyping as it features MatLab, LabView and Jupyter Notebook. It’s really easy to control, and enables an engineer to do things quickly.

“A third customer database is hand radio operators – communicating in RF frequency. Ideal for military and law enforcement services. These are customers who don’t want to buy a completed solution but want to build their own software defined radio. So they build their own amplifiers, filters and so on.

“By using a traditional instrument, you are using something that is dedicated to doing one job. You buy a scope for example, for €1,000 and it only does one job – albeit very well. With STEMlab we have around 80% of the features that a traditional scope has. However, the front end is not designed to be just an oscilloscope. We have a customer that has told us that they do not use a traditional scope anymore, they just use STEMlab. He told us that for normal measurements that’s what he needs. If he wanted to go into greater detail then sure he would use a standard instrument, but for normal day-to-day measurements STEMlab is perfect.”

The University of the Basque Country

Safety and performance of the turbo-engine in an aircraft is directly affected by the health of its blades. In recent years, several improvements to the
sensors have taken place to monitor the blades in a non-intrusive way. In this application STEMlab is providing online measurement of the tip clearance and time of arrival of a bladed disk of an aircraft engine.

During nuclear warhead verification. Most radioactive sources produce gamma rays, which are of various energies and intensities. These sources can be detected using gamma spectroscopy. A sodium-iodide detector turns radiation into light that causes an electrical pulse. It’s this pulse that is measured by STEMlab.

STEMlab is helping the university conduct 4D imaging of the Earth’s atmosphere/ionosphere, solar storm impact detection and quantification. The ionosphere plays an important role in global communications. Ionised by radiation, this electricity-rich region is used for the transmission of long wave communications such as radio waves and can provide vital information on climate change.

STEMlab is being used to generate ultrasonic power pulses for cell stimulation that can be used to help cure breast cancer. The device needed to be as flexibly designed as possible in order to deliver a wide range and different shapes of stimulation signals to stimulate cells. STEMlab was used to generate and control the signal of the ultrasonic transducer.

This is a Square Kilometre Array (SKA) project with the largest radio telescope in the world. Observation of space is achieved through a radio or optical window. Radio waves let us see objects we can’t see in visible light like gasses and galaxies. New radio telescopes will require more antennas and receivers in order to achieve the best resolution. STEMlab was proposed as the most suitable and affordable solution for this application.

To complement the Rec Pitaya STEMlab platform, the company has now launched a VNA bridge module and application that enables STEMLab to function as an affordable vector network analyser (VNA) – a precision measuring tool that tests the electrical performance of high frequency components in the radio frequency.

The VNA is a contributed application that runs on Windows and Linux. It covers a frequency range of 500kHz to 62MHz, has a directivity of 42dB (typ), a dynamic range of 74dB and a noise floor of 88dBm. Software features include plot formats (Smith chart, impedance, SWR, reference coefficient, return loss); open, short and load calibration modes; measurement export and marker readouts. Included in the VNA module box are an RF SWR bridge module in an aluminium enclosure, calibration accessories (50ohm, open and short load) and cables.

Mesar concluded: “Our Vector Network Analyser running on STEMlab is a great solution that enables engineers to test and optimise the performance of antennas, RF filters, RF switches, couplers and cables. It is the perfect tool for professionals seeking affordable, highly functional test and measurement equipment, educators, students, makers, hobbyists and HAMRADIO amateurs.”

Joe has been in the industrial trade press for nearly ten years. When he can’t be found on the golf course, talking about the latest trials and tribulations of his beloved Crystal Palace FC or walking Stanley, his mischievous French bulldog, Joe can be found writing about the latest technology news for EEDI.

A new form of light has been created by photons

Q&A: Crisis ColLab Initiative Assists in the Fight Against COVID-19