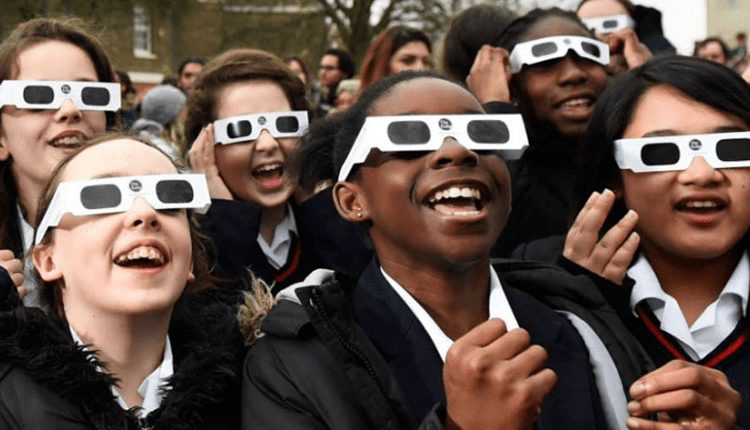 The First US Total Solar Eclipse In Almost 100 Years

For the first time in almost 100 years, a total solar eclipse will sweep across the United States from coast to coast, bathing the country in the moon’s shadow and providing a unique view of the sun — as long as the clouds stay away, on Monday, August 21.

If you’re in the narrow band of totality from Salem, Oregon to Charleston, South Carolina, day will turn to night as the moon blocks the entire disc of the sun for a few eerie minutes.

The rest of the continental United States will witness a partial solar eclipse. In Wisconsin, anywhere from 76% of the sun will be hidden in Superior to the north to 87% in Platteville to the south. A maximum of 85% of the sun will be blocked by the moon in Madison at 1:15pm.

“The sun will look like a thin crescent moon,” explained Jim Lattis, who directs the University of Wisconsin­-Madison’s astronomy outreach center Space Place.

Lattis will be giving talks on the eclipse and selling solar viewing glasses at two events in August. At 7pm on Wednesday, August 2, he will present an informal overview of the eclipse and take questions from the crowd at Nomad World Pub, 418 E. Wilson St., for Science on Tap–Madison. And on Tuesday, August 8, at 7pm, he will give a longer talk on total solar eclipses at Space Place, 2300 S. Park St. Both events are free and open to all ages.

Lattis said that the effects of the partial eclipse in Wisconsin will be subtle, but worth watching nonetheless.

“If you were indoors you might just think it had gotten overcast,” said Lattis. “But if you get outside, there are things you will notice. The main thing is that shadows begin to get a little weird.”

What we don’t usually notice, said Lattis, is that everywhere the sun casts a shadow or shines through small holes, it produces images of itself, as in a pinhole camera. When the disc of the sun turns into a crescent, those subtle, round images of the sun that normally go unnoticed suddenly appear as bizarre crescents, distorting shadows and catching our attention. Even overlapping leaves from trees will cast unfamiliar crescent images.

“And that’s actually the easiest way to observe a partial eclipse, is just to find a place where sunlight is coming through some leaves,” said Lattis. “Look anywhere that there’s a pinhole image, where the sun shines through a little crevice or something along that line.”

Direct viewing requires special eyewear that greatly reduces the brightness of the sun to safe levels. Using such solar glasses, the image and effect will surpass tree-leaf pinholes.

The difference between a partial and a total solar eclipse is, well, night and day.

“The sky darkens and you can see bright planets and bright stars in the sky,” said Lattis, who has witnessed one total eclipse before and had others spoiled by rain. “It’s almost as if night has fallen, but it’s a little closer to deep twilight.”

“In the case of a total eclipse you’re immersed in the shadow of the moon, and you can actually see out of the shadow — it’s like twilight all around the horizon. It’s not something we see every day.”

The temperature drops, and breezes kick up or die down. Birds sing like it’s night; other animals might get confused and start heading to bed. The sun’s corona, a large halo that is too dim to see outside of an eclipse, appears around the moon.

“The corona itself has this kind of iridescent appearance, and we don’t really know why,” said Lattis. “Researchers still don’t entirely understand the physics of the corona.”

Solar eclipse research has a long history at UW, said Lattis. In the 1920s, ‘30s and ‘40s, UW–Madison scientists were eclipse chasers, carrying special equipment developed at the university to measure the sun’s corona. While spacecraft can now track the corona, for centuries the only way to study the mysterious halo was to trek to the site of a total eclipse.

Total eclipses also attracted planet hunters. In the 1800s, Newton’s laws still couldn’t explain part of Mercury’s orbit around the sun; a new planet was hypothesized to explain these inconsistencies.

“Notoriously, the first director of UW–Madison’s Washburn Observatory, James Watson, thought that he had discovered just such a planet, which had already been named Vulcan,” said Lattis. “Watson was trying to confirm this alleged planet and thought that he did in the eclipse of 1878. Eventually it was concluded that nobody knows what he saw, but it wasn’t a planet.”

Mercury’s peculiar orbit was eventually explained by Albert Einstein’s theory of general relativity, which provided a new explanation of gravity as a distortion of space-time. Another prediction of Einstein’s theory was that gravity would bend light, and to a greater degree than Newton’s laws predicted. Yet again, a total eclipse was required to observe starlight bending around the sun. British astronomer Arthur Eddington provided the first evidence of this effect during the eclipse of 1919.

Lattis said leave the instruments — and the photography — to the pros, and just enjoy the rare event. If you want to travel to see the total solar eclipse, the closest path of totality to Wisconsin is just south of St. Louis, Missouri, or southern Illinois.

The number one rule for watching the eclipse is not to look directly at the sun without special eyewear, even when it is partially obscured.

“Just follow your instincts to look away from the sun, and you’ll be okay,” said Lattis.

Planet Proxima b Needs To Get A Grip