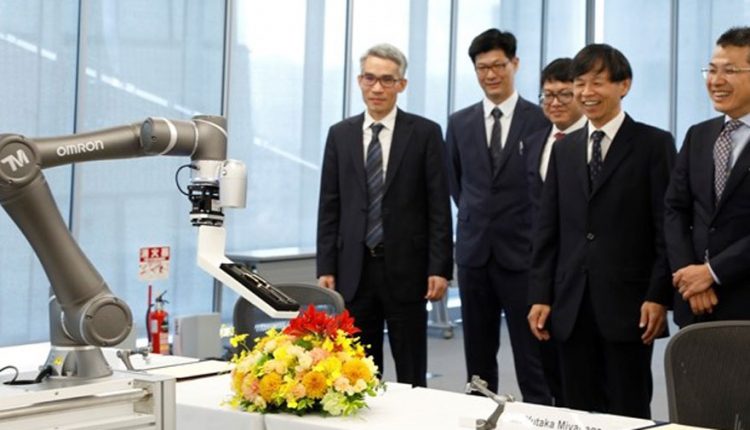 The harmonization of humans and machines in the manufacturing industry

Omron and Techman Robot have announced that the two corporations have signed an agreement to form a strategic alliance in the area of collaborative robots.

Through this alliance, Omron will globally market and sell Techman’s TM series of collaborative robots via Omron’s worldwide distribution network under a co-branded logo, starting in the second half of FY2018.

Furthermore, Omron and Techman will cooperate in developing the next generation of collaborative robots that will be easier to integrate with Omron’s other factory automation products in order to realize an innovative manufacturing environment where humans and machines work in harmony.

Factories worldwide are facing major challenges in having to manufacture a high mix low volume of products to meet their customer demands and shorter product life cycles while dealing with labor shortage issues.

Collaborative robots that can work safely in the same environment with people have an important role in enabling this kind of ‘flexible manufacturing’.

In addition to the regular TM series of collaborative robots, Omron will start selling the new models which are ‘mobile compatible’, meaning that they can be easily integrated with Omron’s LD mobile robots.

Omron’s mobile robots, which can move autonomously by avoiding people and obstacles, already work safely with humans by automating material handling operations all over the world.

Mounted with a collaborative robot arm on top, they can not only transport material from one location to another, but will also be able to perform tasks, such as the pick and place of parts onto trays, in each of the locations.

“Since the acquisition of Adept Technology in 2015, Omron has been putting great resources in the development of the robotics technologies and market,” said Seigo Kinugawa, Executive Officer and Senior General Manager of the Robotics Business Development Project at Omron.

“TM robots are smart, simple to use and safe,” said Ho Shi-Chi, Chairman of Techman Robot.

“We endeavor to improve the life of humans based on innovation and our alliance with Omron will help us move a big step toward that goal.”

The TM robots have the following features that stand out in this new field of human-robot collaboration.

Smart: The TM robots have a built-in intelligent vision system that can be used for pattern recognition, object positioning and barcode identification.

Simple: A complete pick and place application using vision can be taught in five minutes with its all-graphic, flow-based user interface, TMflow.

Safe: The TM robots comply with the safety requirements for collaboration of humans and robots as specified in ISO 10218-1 and ISO/TS 15066.

The new US tariffs could come back to haunt Trump