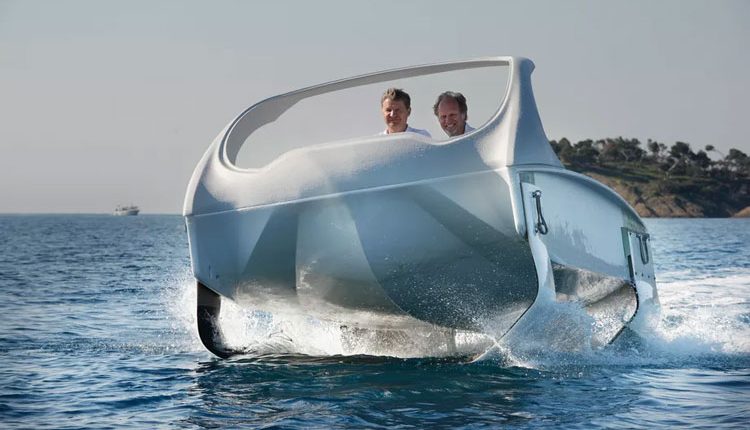 French startup, SeaBubbles, that hopes to be the Uber for water taxis, has a new prototype to show off. The boat is semi-production ready and will be in attendance at the Viva Technology conference in Paris next month, weeks after the company announced that it raised €10m ($10.8m) in funding from MAIF, a French insurance group.

Last year, the futuristic water taxi startup first revealed its bold vision to revolutionize urban travel: a network of autonomous, car-shaped river shuttles equipped with hydrofoils that it would use to literally rise above the surface of the waves. These water cars would be distributed to cities situated on major waterways around the globe for use in a personalized, on-demand ferry service.

The latest version of the prototype looks a lot closer to ready than the one we saw last March. The addition of a windshield will no doubt come as a relief to SeaBubbles’ co-founders, who were probably getting soaked by the spray while driving the previous, windshield-less prototype.

The boats hover inches above the water thanks to the same physics phenomenon that allowed the Hydroptere sailboat to set water speed records. Alain Thebault and Anders Bringdal, a sailor and windsurfer, respectively, started SeaBubbles in early 2016. Early backers include the founder of drone maker Parrot, Partech Ventures, and the French government-backed BPI fund. Now with MAIF’s support, the founders are aiming to have over a dozen vessels in the River Seine in Paris by this summer.

These public demonstrations, under the name ‘SeaBubbles Pop Up Tour’, will include open trials for investors, media, and members of the public. SeaBubbles hopes to expand its service to a dozen cities in Europe, Asia, the Middle East, and the US by 2018, with its on-demand, water taxi service operational in 50 cities by 2024.

Of course, SeaBubbles faces enormous financial and regulatory challenges. Bringdal and Thebault have to build a working prototype, woo investors, convince city officials to allow them to operate in their waterways, and build an app for passengers. They also have to prove that these vessels are safe, and install dockside electric charging stations. Uber just built an app. SeaBubbles will have to create an entire transportation network from scratch.