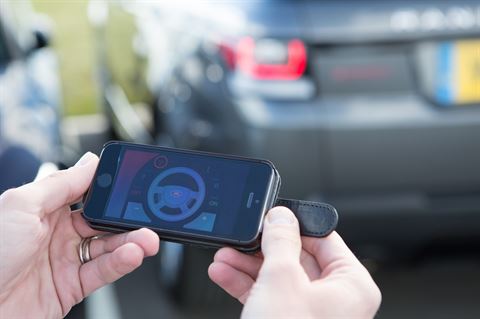 Jaguar Land Rover has revealed some of its technologies that autonomous vehicles could be using in the future.

One such technology is a Remote Control Range Rover Sport research vehicle that demonstrates how a driver could drive the vehicle from outside the car via their smartphone. The smartphone app includes control of steering, accelerator and brakes as well as changing from high and low range. This would allow the driver to walk alongside the car, at a maximum speed of 4 mph, to get their car out of challenging situations safely, or even to negotiate difficult off-road terrain.

The driver could use the smartphone to reverse the car out of a parking space if someone has parked too close for them to open the door, or allow the driver to become their own off-road spotter, to guide the car over off-road obstacles from outside the vehicle.

By walking alongside the car, the driver could continually check ramp, approach and departure angles and allow precise positioning of the vehicle when rock crawling. It could also be an invaluable aid when the vehicle is fording a stream or traversing sections made slippery by mud or snow. The remote control function will only operate if the user is within 10 meters of the car and if the smart key can be detected. The system will stop the vehicle if the driver moves out of range or gets too close.

Some other future possibilities for this technology could include more autonomous functionality that lets the driver dictate a simple command from the handset to traverse an obstacle or exit a parking space, and the car does the rest.

Learn even more in Land Rover’s video below.