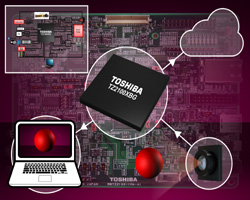 Toshiba America Electronic Components, Inc. announced the RBTZ2100-1MA and RBTZ2100-2MA starter kits for development of a wide range of applications using the Toshiba TZ2100 Application Processor Lite (ApP Lite™) series . The kits include reference boards and device drivers that allow devices to be evaluated in their final application environment, making efficient use of developer resources and shortening their de

Both kits, built to support TZ2102 single-core ARM® Cortex®-A9-based processors with up to 600MHz clock rate, provide the reference board and board support package (BSP), as well as AC adapter cable and user manual. Both support extended interfaces, including USB2.0 host, UART, I2C and PWM, as well as a range of device drivers, and both include an ARM JTAG connector.

The RBTZ2100-1MA includes a general-purpose board that supports processors with 512MB DDR3L SRAM and 16MB SPI Flash ROM, and can use either a camera or LCD panel input connector. It also has a MicroSD memory card slot, 10/100 LAN connector and BSP that supports Ubuntu® Linux®. The RBTZ2100-2MA, developed for amusement equipment, supports 256MB DDR3 SRAM processors with 256MB parallel Flash ROM, and includes a 32-bit external bus interface connector. The BSP supports the µITRON 4.0-based μC3® RTOS.