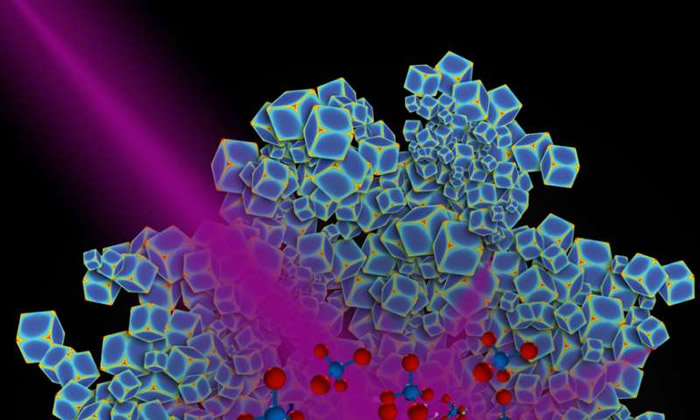 Tiny nanoparticles that help convert carbon dioxide into methane using only ultraviolet light as an energy source have developed by researchers at Duke University.

Having found a catalyst that can do this important chemistry using ultraviolet light, the team now hopes to develop a version that would run on natural sunlight, a potential boon to alternative energy.

Chemists have long sought an efficient, light-driven catalyst to power this reaction, which could help reduce the growing levels of carbon dioxide in our atmosphere by converting it into methane, a key building block for many types of fuels.

Not only are the rhodium nanoparticles made more efficient when illuminated by light, they have the advantage of strongly favoring the formation of methane rather than an equal mix of methane and undesirable side-products like carbon monoxide. This strong “selectivity” of the light-driven catalysis may also extend to other important chemical reactions, the researchers say.

“The fact that you can use light to influence a specific reaction pathway is very exciting,” said Jie Liu, the George B. Geller professor of chemistry at Duke University. “This discovery will really advance the understanding of catalysis.” 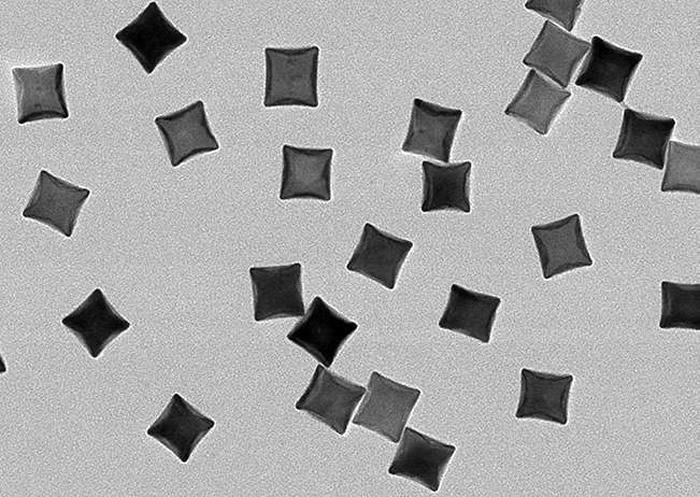 Despite being one of the rarest elements on Earth, rhodium plays a surprisingly important role in our everyday lives. Small amounts of the silvery grey metal are used to speed up or “catalyze” a number of key industrial processes, including those that make drugs, detergents and nitrogen fertilizer, and they even play a major role breaking down toxic pollutants in the catalytic converters of our cars.

Rhodium accelerates these reactions with an added boost of energy, which usually comes in the form of heat because it is easily produced and absorbed. However, high temperatures also cause problems, like shortened catalyst lifetimes and the unwanted synthesis of undesired products.

In the past two decades, scientists have explored new and useful ways that light can be used to add energy to bits of metal shrunk down to the nanoscale, a field called plasmonics.

“Effectively, plasmonic metal nanoparticles act like little antennas that absorb visible or ultraviolet light very efficiently and can do a number of things like generate strong electric fields,” said Henry Everitt, an adjunct professor of physics at Duke and senior research scientist at the Army’s Aviation and Missile RD&E Center at Redstone Arsenal, AL. “For the last few years there has been a recognition that this property might be applied to catalysis.”

Xiao Zhang, a graduate student in Jie Liu’s lab, synthesized rhodium nanocubes that were the optimal size for absorbing near-ultraviolet light. He then placed small amounts of the charcoal-colored nanoparticles into a reaction chamber and passed mixtures of carbon dioxide and hydrogen through the powdery material.

When Zhang heated the nanoparticles to 300°C, the reaction generated an equal mix of methane and carbon monoxide, a poisonous gas. When he turned off the heat and instead illuminated them with a high-powered ultraviolet LED lamp, Zhang was not only surprised to find that carbon dioxide and hydrogen reacted at room temperature, but that the reaction almost exclusively produced methane.

“We discovered that when we shine light on rhodium nanostructures, we can force the chemical reaction to go in one direction more than another,” Everitt said. “So we get to choose how the reaction goes with light in a way that we can’t do with heat.”

This selectivity—the ability to control the chemical reaction so that it generates the desired product with little or no side-products—is an important factor in determining the cost and feasibility of industrial-scale reactions, Zhang says.

“If the reaction has only 50 percent selectivity, then the cost will be double what it would be if the selectively is nearly 100 percent,” Zhang said. “And if the selectivity is very high, you can also save time and energy by not having to purify the product.”

Now the team plans to test whether their light-powered technique might drive other reactions that are currently catalyzed with heated rhodium metal. By tweaking the size of the rhodium nanoparticles, they also hope to develop a version of the catalyst that is powered by sunlight, creating a solar-powered reaction that could be integrated into renewable energy systems.

“Our discovery of the unique way light can efficiently, selectively influence catalysis came as a result of an on-going collaboration between experimentalists and theorists,” Liu said. “Professor Weitao Yang’s group in the Duke chemistry department provided critical theoretical insights that helped us understand what was happening. This sort of analysis can be applied to many important chemical reactions, and we have only just begun to explore this exciting new approach to catalysis.”