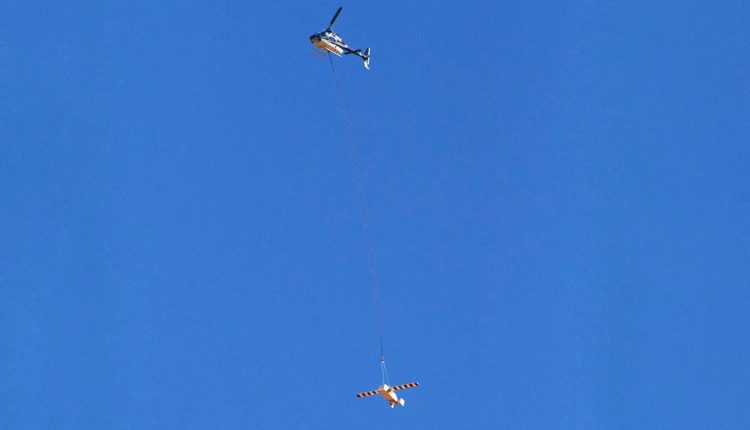 The US Marine Corps is testing disposable autonomous gliders that could deliver supplies to troops in enemy territory, or provide support to amphibious forces assaulting beaches far from resupply ships.

This marriage of glider technology with advanced guidance and control systems turns cargo boxes into flying trucks, capable of carrying 1,600 pounds of supplies to drop zones up to 74 nautical miles away. That kind of range means larger aircraft can deploy the gilder drones far from the battlefield—and help avoid the risk of enemy fire.

“Rather than fly a bunch of helicopters around and needing to stop and unload, here you could just have a cargo plane dump a couple gliders off the back and hit a couple locations,” said Paul Scharre, Project Director for the 20YY Warfare Initiative at the Center for a New American Security. “It might allow for faster dispersed resupply in more hostile environments.”

California startup Logistics Gliders builds each glider using just $1,000 worth of plywood, household hardware, and off-the-shelf electronics. “Building LG gliders has a lot more in common with building household furniture than with building a high-tech military aircraft,” said design and flight test lead Marti Sarigul-Klijn. Another distinction: The wings and tails snap off during landing, making every unit disposable.

The affordability and disposability of glider drones offers key advantages over the Joint Precision Airdrop System, a expensive GPS-guided, steerable parachute the Pentagon currently uses. Each resusable airdrop system cost the Army $29,700 in 2011, when it used them to drop 80 million pounds of supplies to US troops in Afghanistan, after roadside bombs made overland supply routes too risky. The glider drones offer three times the range of JPADS, greater durability in adverse weather, and don’t require sending ground troops to retrieve them. Logistics Gliders is looking at whether having the gliders deploy a parachute over their drop zones might improve precision, particularly in dense urban areas.

The company worked with the University of California at Davis to develop the autonomous guidance unit that provides the brains of the glider drone. And it is developing versions of the aircraft for Darpa and the Marine Corps Warfighting Laboratory. The Marine Corps and the Navy tested them during the 10-day Advanced Naval Technology Exercise at Camp Pendleton, California, in April, but the results remain a secret for now.

Still, the Marines’ Tactical Air Delivery program thinks the drones could someday be deliver a day’s worth of supplies to Marine rifle units in the field. Ideally, such a system would provide the precision and payload of JPADS and the range and affordability of the gliders while freeing troops from the burden of retrieving expensive gear.

Glider drones could also serve a bigger support role under Darpa’s Revolutionary Airlift Innovation, by replacing slow ship-to-shore supply chains with a faster, cheaper method of supplying amphibious troops. Humanitarian missions could benefit from the technology as well, by making it relatively easy to drop supplies to civilians in besieged cities or disaster zones.

The technology’s not perfected yet; much still depends on whether these gliders can deliver their cargo loads accurately and at a low enough cost point. And even then, that 75m delivery range won’t be of much help delivering supplies into contest airspace, where enemy fighter aircraft or longer-range surface-to-air missile threats could take them down.

But in battlefields like Iraq and Iran, where the US military enjoys air superiority, they could be tremendously useful. Facing the type of shoulder-fired missiles that the Islamic State deploys against helicopters and airplanes, autonomous drones offer a far more appealing option to sending pilots into harm’s way.

Apple breaks history as the first company worth $800bn