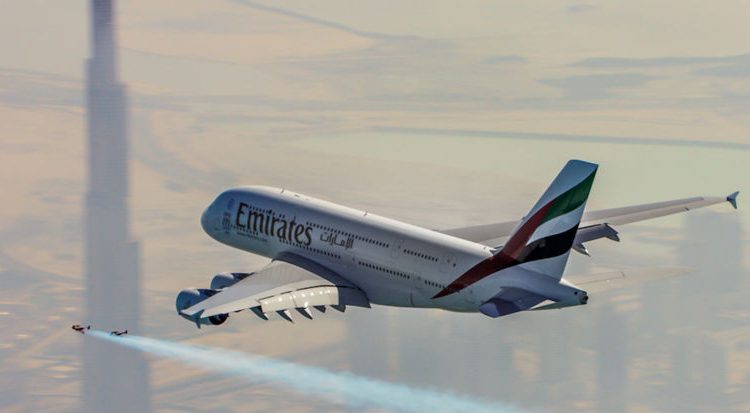 Video of the Day: Jetman flies next to an Emirates A380 airliner above Dubai

Perhaps you’ve heard about  Swiss pilot and aviation enthusiast Yves Rossy, known as the inventor of the individual jet pack that uses carbon-fiber wings to make him fly. “Jetman” created the suit that grants him a 7.9-foot wingspan and is powered by jet engines to turn himself into a real-flying man.

And if that wasn’t impressive enough, he’s gone on some monumental flights including high over the Alps and the Grand Canyon. Now he’s done it again, along with his protegee Vince Reffet. The duo was recorded flying in formation alongside a giant Emirates A380 airliner over Dubai.

Emirates and Jetman designed the flight, including the  world’s largest passenger aircraft flying at 4,000 feet in two holding patterns. The A380 aircraft was then joined by the Jetman duo, while experienced pilots and operators of the smallest jet propelled wing, who were deployed from a helicopter that hovered above the aircraft at 5,500 feet. The duo conducted formations on both sides of the aircraft and joined to one side before breaking away.

Watch the video for the shocking footage.