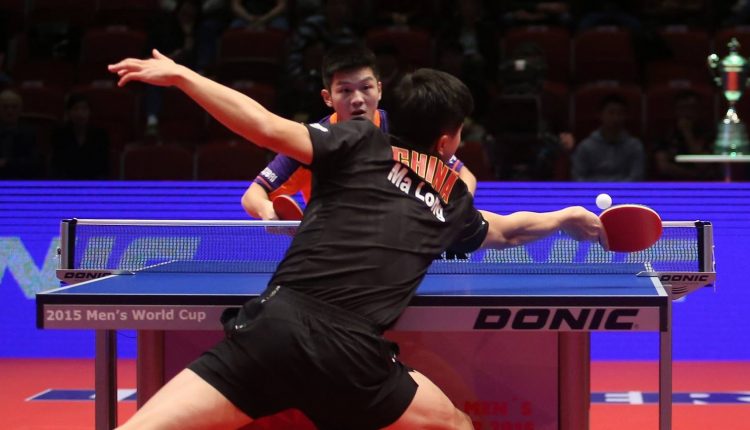 “The TAM network enables extraction of the input attributes and technique rules in order to classify the skill level of the players from the sensor data,” explained Hayashi. “In addition, this approach clarified differences between top-class players and those we classified as middle level and beginners.

“The data analysis was used to evaluate the possibility of improving skills specific to table tennis although this approach could be used for analysis of other sports.”

One of the strengths of the Topographic Attentive Mapping (TAM) network that it has similarities with the human vision system—an important factor in sports where strategies are based on studying the visual movement of players in action.

The pdi-Bagging/Boosting is a multi-layer clustering method as a machine learning, and which improves the discriminate accuracy of skill level by adding virtually generated data to learning data. Hayashi and his collaborators extracted input data skill rules based on the forehand stroke of table tennis with the TAM network and the pdi-Bagging/Boosting clustering. The results enabled specific definition of differences between players with different abilities.

Background and Proposal for ‘Visible AI’

Professor Isao Hayashi has studied what he calls the ‘fuzzy if-then’ rule, since his student days. This is an artificial intelligence (AI) model that “visualizes” knowledge by connecting conditions and execution, for example, ‘if speed is VERY HIGH…then execute this command STRONGLY’. The ‘VERY HIGH’ and ‘STRONGLY’ are fuzzy sets.

In order to ‘visualize’ this complex and multidimensional so-called ‘invisible knowledge’ derived from the ‘if-then’ approach, Hayashi developed a ‘neural network’ that executes the operations, collects data, and automatically creates an easy to handle format from the data. Specifically, Hayashi proposed ‘neuro-fuzzy’ logic that combines neural networks with the same learning functions as the human brain and fuzzy inference of visible knowledge.

Hayashi observes that ‘deep learning’ and other such analytical models, for example technology used for controlling autonomous cars, are machine-black boxes, where raw data is inserted and left there until results are output.

“The process is not visible but convenient,” said Hayashi. “But there are social concerns that machines will run away. On the other hand, neuro fuzzy is ‘visible AI’ that incorporates ‘if-then rules’ into the decision-making process, and you can track down problems and stop the machine if necessary. Ultimately, a mixed model that also learns using visible knowledge is the ideal goal.”

AI to Train the Coaches in Table Tennis

Hayashi is the president to the table tennis club at Kansai University, tested the validity of AI model in sports informatics, specifically in table tennis.

Table tennis players go through three main motions: ‘recognition’ of the ball’s trajectory; ‘decision’ how to hit the ball back; and ‘control’ to repeat the technique. Notably, highly skilled, world class table tennis players are able to instantly judge which of their attacking patterns their opponents are not good at responding.

Hayashi is using ‘bagging/boosting inference’ in the decision process. Data such as where the opponent hit the spinning ball and the locations on the table where it won or lost is input to the AI model in advance and classified into patterns. Analyzing the actual game data based on this allows coaches to infer the best strategy on the spot, namely, in real time.

To test his ideas of using AI coaches in sports, Hayashi has developed the table tennis robot ‘FORPHEUS’ in a collaboration with OMRON Corporation since March 2018.

The robot is not playing to win but to extract the ability of its opponent. Hayashi says that by inferring the ability of the opponent with high-quality rallies, the aim is to be a ‘human-friendly’ robot that naturally improves the ability of players.

AI-Powered Virtual Assistant For Professional Use