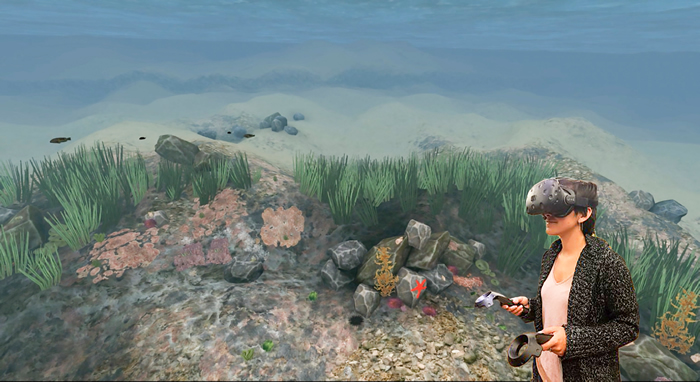 VR simulation transports users under the sea of the future

Try to imagine what the world will look like if human-caused carbon-dioxide emissions aren’t curbed. If your imagination and scientific knowledge can’t take you there, virtual reality can. The Stanford Ocean Acidification Experience, a free science education tool, can take you to the bottom of the sea, then fast-forward to the end of the century, when many coral reefs are predicted to corrode in waters made acidic by the absorption of carbon dioxide from the atmosphere.

“You’re not watching something, you’re doing it,” said communication Professor Jeremy Bailenson, whose Virtual Human Interaction Lab developed the software. “You learn by doing. These are magic, teachable moments.”

Although a dire threat to coral and other marine systems that provide food and employment for hundreds of millions of people, ocean acidification is not a well-known phenomenon. Coral reefs are particularly vulnerable to acidification’s effects on the building of calcium carbonate skeletons and shells.

An immersive experience
The virtual reality simulation allows users to stand in heavy traffic and follow carbon dioxide molecules from car tailpipes to the sea, where they are absorbed. Deep below the waves, you can move amid coral as it loses its vitality and observe the effects of increasingly acidic water on marine life. A narrator explains the processes unfolding before you and encourages you to interact by doing activities such as a species count. Hand controls with haptic feedback make the experience more immersive.

Bailenson and his team developed the software in collaboration with Stanford marine biologists Fiorenza Micheli and Kristy Kroeker (now at the University of California, Santa Cruz), as well as educational technology pioneer Roy Pea, a Professor at Stanford Graduate School of Education. Over the course of two years, they built a virtual replica of a rocky reef around the Italian island of Ischia. Underground volcanic vents have been spewing carbon dioxide at the reef, allowing researchers to measure the impact on marine life and extrapolate what effect people’s increasing fossil fuel use will have in decades to come.

Impacting real-world behavior
Bailenson’s research has consistently shown how putting people in virtual reality can impact behavior in the real world. After being put in a virtual reality simulation, people save more for retirement, exercise more, show more empathy and become more cognizant of their carbon footprint. A Stanford study published in August shows that an earlier, simpler version of the ocean acidification simulation caused a greater sense of empathy than a similar video-only experience. That’s because of something called embodied cognition, the effect of the body’s actions on the mind.

A related 360-degree video (best viewed with a smartphone) developed as part of a master’s degree project by former Bailenson lab member Cody Karutz has been viewed tens of thousands of times since being uploaded to YouTube and Facebook on September 13th. The video premiered at the Tribeca Film Festival in April, where attendants could watch it through virtual reality headwear. “We had a line of dozens of people for 11 hours a day, six days straight,” said Bailenson, a senior fellow at the Stanford Woods Institute for the Environment.

The potential is huge. Although virtual reality is still an emerging technology, hundreds of thousands of consumer sets have already sold. By 2018, that number is expected to grow to more than 170 million, according to industry consulting firm KZero. This coming holiday season is predicted to be a breakout time for sales of the technology. Among other related initiatives, Bailenson is in discussion with various technology and gaming companies to include the Stanford Ocean Acidification Experience in virtual reality-enabled programs. Bailenson hopes the software will become a model for virtual reality field trips.

Recently, Bailenson and his colleagues took the Stanford Ocean Acidification Experience to Washington, D.C., where several lawmakers and dozens of staffers in Congress and the U.S. Agency for International Development tried it out. Among them: Sen. Sheldon Whitehouse of Rhode Island, Rep. Suzanne Bonamici of Oregon and former Sen. Blanche Lincoln of Arkansas. “This simulation shows in rich detail the damage carbon pollution inflicts on our oceans,” Whitehouse said after the Capitol Hill event organized by nonprofit environmental advocacy group Ocean Conservancy. “I appreciate the Stanford Ocean Acidification Experience for calling attention to the peril our oceans face and what we must do to protect them.”

The Stanford Ocean Acidification Experience was developed with funding from the Gordon and Betty Moore Foundation and the Stanford Woods Institute’s Environmental Venture Projects program.

17% of carbon emissions to be neutralized through solar energy