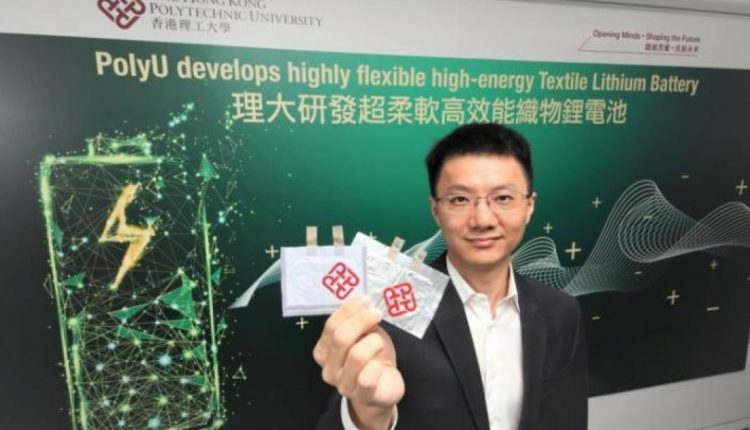 Lithium batteries are currently the dominant rechargeable battery on the market due to their relatively high energy density and long cycle life. The problem is that conventional (and bulky) heavy Lithium batteries are hard to incorporate into use in wearable devices. Over the past decade, scientists have put efforts into developing bendable Lithium batteries, often by using metal foils as current collectors.

Existing Lithium batteries can reach a bending radius of about 25 mm, with low performance of less than 200 Wh/L. Now, a team of researchers from PolyU’s Institute of Textiles and Clothing (ITC) have developed a novel lightweight Textile Lithium Battery that demonstrates high energy density of more than 450 Wh/L, along with excellent flexibility — with a bending radius of less than 1mm, and foldability of over 1,000 cycles with marginal capacity degradation.

The innovation developed by the research team of PolyU’s Institute of Textiles and Clothing (ITC) has snatched three prizes at the 47th International Exhibition of Inventions of Geneva held in April this year, namely a Gold Medal and two Special Merit Awards.

“Wearable technology has been named as the next global big market opportunity after smartphones. Global market revenues for wearable devices are forecasted to grow by leaps and bounds, of over 20% annually, to reach US$100 billion by 2024,” said Professor ZHENG Zijian, who leads the ITC research team.  “As all wearable electronics will require wearable energy supply, our novel technology in fabricating Textile Lithium Battery offers a promising solution to a wide array of next-generation applications, ranging from healthcare, infotainment, sports, aerospace, fashion, IoT to any sensing or tracking uses that may even exceed our imagination of today.”

PolyU’s Textile Lithium Battery addresses energy density, flexibility, mechanical robustness, and cycling stability issues that have been present among this type of batteries in wearable applications.

The team applied a patented novel technology, Polymer-Assisted Metal Deposition (PAMD), a highly conductive metal, copper (Cu) and nickel (Ni) are uniformly and conformally deposited onto pre-treated fabrics. Such fabricated metallic fabrics, featuring low-sheet resistance and large surface area, serve as current collectors in a battery. After adding active materials to act as cathode and anode, the metallic fabrics, together with separator and electrolyte, are assembled into the Textile Lithium Battery.

Laboratory tests conducted by ITC have proven the batteries to possess extremely high mechanical stability, durability, and safety under deformation. When the battery is repeatedly folded in half, twisted at different angles or freely crumpled, its voltage window remained unchanged. Bending tests showed that the battery can be bent over 1,000 times with marginal capacity degradation. Safety tests conducted by continuous hammering, trimming with scissors and penetrating with nail proved the battery can stably provide power output for the electronic components with no risk of catching fire or burst.

How Drones Can Use Their Artificial Intelligence for Smoother Landings

What’s the Relationship Between Your Smartwatch Heart Data and Your Skin Tone?

See the Detection of Stressed Polymer Films, Gels Before they Snap