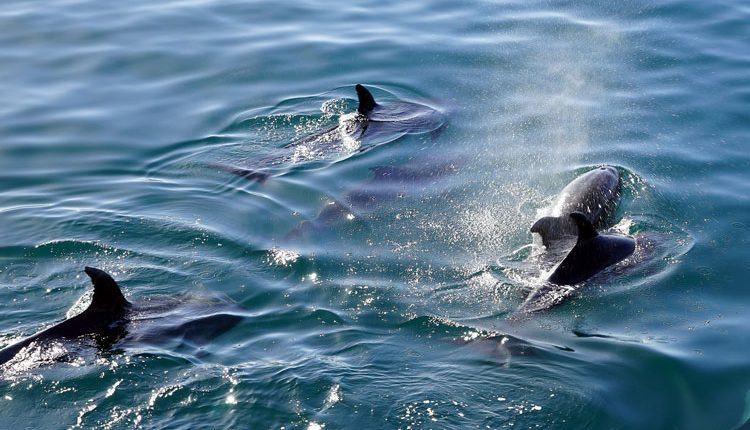 Throughout the world, ocean animals congregate at certain depths, forming layers that can be hundreds of meters thick and may extend horizontally for dozens or even hundreds of kilometers. Because these dense layers of animals reflect sound waves, they are sometimes called ‘sound-scattering layers’ or ‘deep scattering layers’ (though they can occur near the sea surface). A new paper in Limnology and Oceanography shows that, rather than consisting of a random mixture of animals, these layers contain discrete groups or ‘schools’ of squids, fish, and crustaceans.

Deep scattering layers were first recognized during World War II, when sonar technicians observed their sound pulses bouncing off a ‘false seafloor’ that actually consisted of millions of small fish or other animals. Over the following decades, marine biologists towed nets through the layers, bounced sound off them using ship-board sonar systems, and even observed them using small submarines. This research suggested that the layers were sometimes made up of one dominant type of animal but more often comprised a mixture of different animals.

Marine acoustician Kelly Benoit-Bird, the lead author on the recent paper, brought this research into the 21st Century, using deep-diving robots to take a close look at the animals within sound-scattering layers. In Fall 2013, her research team outfitted an Autonomous Underwater Vehicle (AUV) with an advanced sonar system that acted like a very fancy fish finder. By programming the AUV to swim above and through several sound-scattering layers, the team collected sonar data that allowed Benoit-Bird to identify individual animals within these layers, and to track predators that dove into the layers to hunt.

While the AUV conducted sonar surveys within the sound-scattering layers, Benoit-Bird and her collaborators towed a net through these same layers. After bringing the net back on deck, they counted and identified every animal in the net between 1 and 35cm (0.4-14″) long.

The team also categorized the animals in the layers by comparing data from two different frequencies of sonar on the AUV. For example, squids reflect sounds (sonar pings) at a frequency of 38,000 cycles per second (38KHz) more strongly than sounds at 120KHz, but fish reflect sound equally well at both frequencies.

By analyzing the strength and timing of the sonar pulses reflected back to the AUV, Benoit-Bird was able to estimate the sizes of individual animals in each layer and how far apart they were from their neighbors. Putting all these data together, the researchers created an index showing how similar or different each animal was from its neighbors.

The results of this analysis were surprising. It turned out that different types of animals were not randomly distributed within each layer, but formed groups with distinct boundaries. These groups consisted of animals of the same species and similar size. For example, small krill all swarmed together in a group that might be eight meters across. In the same deep scattering layer, right next to the krill swarm, might be a school of lanternfish 15m across, with little or no intermixing between the two groups.

The researchers also discovered that the physical extent of these groups varied depending on the size of the organisms. Smaller animals generally stayed closer to their neighbors, forming smaller groups. Most groups were about 100-animals wide in the horizontal dimension, regardless of whether they consisted of fish, squid, or shrimp. The spacing between the animals in each group was also very consistent, each animal staying at least one body length from its nearest neighbors.

The researchers speculate that these groups, consisting of lots of similar animals spaced evenly apart, could confuse visual predators such as dolphins, which target one animal at a time. This effect has previously been observed for schools of fish surrounded by open water near the sea surface, but has never before been seen in animals within deep scattering layers, where the schools are surrounded by other schools, and there is little or no sunlight. As Benoit-Bird pointed out, “Schooling was previously thought to occur mostly in surface waters, but this was just because we were limited in our perspective, looking down from the surface.”

During several of their surveys, the researchers observed Risso’s dolphins swimming near their research vessel. Using sonar data from the research ship and the AUVs, the team was able to track these dolphins as they swam through sound-scattering layers in search of prey (mostly squids). When a dolphin approached a group of squid, the sonar showed individual squid moving closer together until they were only half as far apart as in undisturbed groups. The squids also spaced themselves more precisely so that each animal was exactly the same distance from all of its neighbors.

Because the squids swam closer together when dolphins were around, their groups became smaller. At the same time, groups of animals on either side of the squid expanded, preventing gaps from forming between neighboring groups in the same layer. This cooperation among animals within a single layer suggests that there must be strong survival benefits in maintaining a continuous horizontal layer, and also in maintaining distinct groups within the layer.

Previous researchers have suggested that animals might just happen to congregate in deep scattering layers because they were searching for similar food or other resources. But as Benoit-Bird pointed out, “This study shows that sound-scattering layers are not just accidental aggregations; they are the result of intentional effort by both individual animals and groups of animals.”

“Although we’ve only studied the characteristics of sound-scattering layers in Southern California so far, we know they occur all over the world,” she said. “And as we are learning how much biomass is contained in these layers, we are also learning how the animals in the layers are preyed on by predators such as dolphins and tunas. Understanding how these layers form and how they are maintained in the face of predation will help us understand essential connections between the surface and deep-water food webs.”